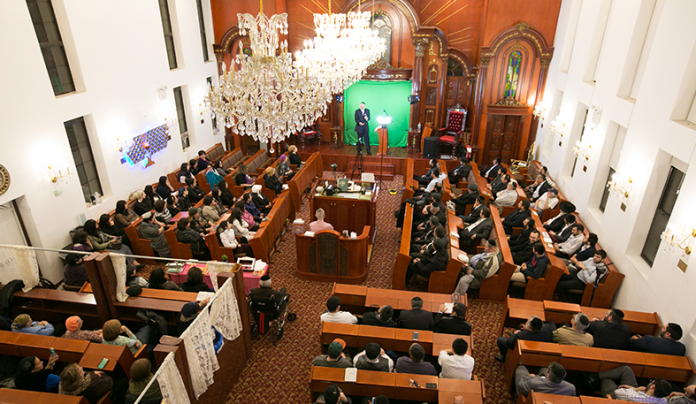 They say that every journey begins with a single step, but in the case of Chazaq, a Queens-based outreach organization that has touched the lives of Jews all across the globe, it was a free handout sharing inspiring thoughts on the parsha of the week that got the proverbial ball rolling.

The year was 2004 and Rabbi Ilan Meirov wanted to share the beauty of Yiddishkeit with members of the local Bukharian Israeli community who knew little about their religious roots. It was clear from the very start that there was a spiritual spark just waiting to be kindled. For the next year, Rabbi Meirov put together weekly sheets in Hebrew, filling them with powerful, life-changing lessons and distributing them in synagogues, pizza shops and restaurants throughout Queens. But after finding himself newly married and unable to invest the time needed, Rabbi Meirov had no choice but to discontinue the parsha papers, a decision that left his younger brother Yaniv, then a 15-year-old yeshiva high school student, thoroughly dismayed.

“People were inspired and thirsty for the truth and they took those lessons home,” Yaniv Meirov told Olam Yehudi. “Since my brother was unable to continue what he had started, I picked it up and ran with it, this time in English. We put them out everywhere we could and they were really popular.”

In addition to filling his sheets with lessons from the parsha, Meirov tackled a wide variety of topics including Shabbos, kashrus and tznius. The feedback he got was so positive that he decided to host a small event at Beth Gavriel Bukharian Jewish Center in Forest Hills, hoping to build on the momentum generated by the weekly handouts.

“Honestly, we were expecting that ten people would show up, maybe 50 if we were really lucky, but we had over 500 people,” recalled Meirov. “To make a long story short, we told ourselves that it was very, very clear that the community had a tremendous interest in Torah and it was up to us to try to fill that need.”

That event was just the tip of the iceberg, with the Meirovs continuing to share the Yiddishkeit instilled in them by their Bukharian parents with those who had yet to be inspired by the beauty of a Torah lifestyle. As they continued to run events, it became clear that there were hundreds of Bukharian Jewish youngsters attending public schools waiting to be uplifted. Chazaq was officially launched in 2006, and started its first official after-school teen program two years later, drawing boys and girls from Forest Hills High School whose student body included a whopping 1,200 Jewish kids.

“We had amazing mentors, teachers and rabbeim coming to teach and had big brother and big sister programs, food, trips, raffles, prizes and retreats,” said Meirov. “We gave them our hearts and souls and we saw them turn their lives around completely.”

Buoyed by the teen program’s accomplishments, Meirov reached out to community leaders to determine what his next step would be. He was advised to set his sights on a target that was simultaneously smaller but larger – elementary school students. Taking advantage of the fact that school was only in session from Monday through Friday, Meirov created a Sunday program, and grade schoolers came in droves. They learned about Shabbos, the various yomim tovim and how to read Hebrew, and devoured a curriculum that also included Jewish songs, values and traditions. The Sunday school program’s popularity led to an afterschool program for the same age group, providing an ever greater number of opportunities to expand the children’s religious horizons in their most formative years.

Each successful initiative brought with it the realization that the Bukharian Jewish community was ready to embrace the powerful messages Chazaq had to offer and, like a snowball rolling downhill in an avalanche, the Meirovs kept on picking up speed. The emphasis on education targeted all ages, from kids to couples to senior citizens, or in Meirov’s words, an age range of “zero to 120.” A popular women’s division offered shiurim on a wide variety of topics and highlighted the importance of building a home based on Torah values, while the growing teen division offered high schoolers a safe environment that nurtured their growing religious awareness. It also empowered them to resist peer pressure in a world filled with unhealthy distractions.

Looking ahead to the next generation, Chazaq embarked on a mission that would have seemed unthinkable just a few years earlier.

“We created a full beit medrash and kollel where we are building future rabbis and community leaders,” said Meirov. “The future is looking very bright.”

Beth Midrash Nosson Meir and Kollel Zichron Moshe are both under the leadership of Rav Ahron Walkin, whose belief in the potential of the Bukharian Jewish community is so strong it has him traveling daily from Lakewood to Queens. Delving into the intricacies of Gemara and the depths of halacha, participants slowly but surely began climbing up the ladder of success in Torah study on their journey to becoming the next spiritual leaders of the Bukharian Jewish community.

But there was still so much more to do. From carnivals to Uncle Moishy concerts to shiurim given by prominent speakers to Shabbatons and more, Chazaq began filling its calendar with events, offering something for everyone. As other needs became apparent, Chazaq took its game up yet another notch, opening a kosher food pantry in conjunction with the Metropolitan Council on Jewish Poverty in the heart of Kew Gardens Hills, distributing glatt kosher food at no charge to families in need, all the while ensuring full confidentiality. The weekly parsha paper began appearing in English, Hebrew and Russian, and with a circulation of 10,000, it provided Bukharian Jewish families with a full array of divrei Torah and interesting topics to enhance their Shabbos tables. A bi-monthly magazine featuring Torah thoughts, columns on family life, marriage, children, recipes and advice from well known professionals and members of the medical field opened up additional vistas, as did a 24/6 music stream on the Chazaq radio station at www.chazaq.org.

Meirov’s fear that he would have to curtail his outreach activities when he got married proved to be unfounded. His wife Leora was already finding ways to implement her new husband’s ideas during Sheva Brachos and three months later Chazaq hosted its first major event at Forest Hills High School in March 2013, with more than 1200 people turning out to hear from Rabbi Paysach Krohn, Rabbi Zecharia Wallerstein and Charlie Harary.

Despite the success of Chazaq’s after school programs, Meirov considers them to be a stepping stone, not a final goal. Two years ago Chazaq launched its No Child Will Be Left Behind campaign and a yeshiva placement division. Parents and students are invited to open houses where they can speak with representatives of more than a dozen schools and, hopefully, find a placement that is well suited to them.

“Our main goal is hatzalas nefashos, saving lives,” observed Meirov. “If we don’t get these kids now, we may lose them. Two years ago we had 1,000 spots available in kiruv seats in our schools and today there are only 500 left. Our goal is to fill them up with kids and once we do that, we will open up more yeshivot.”

Chazaq, which works with approximately 50 different yeshivos in Queens, Brooklyn and on Long Island, does not provide tuition assistance for children, but instead works closely with third party organizations to help parents manage the cost of private school education. Meirov also pounds the pavement, getting as many scholarships as he can, enthusiastically cajoling donors into making a profound difference in the lives of others.

Today Chazaq has nearly 100 employees, most of whom work part time. Events are held every night of the week and have expanded to Lakewood, the Five Towns, West Hempstead, Great Neck and even as far as Arizona where an after school program has been opened. A recent girls’ shabbaton in Kew Gardens Hills had several participants admitting that they have never observed Shabbos before, while a Sukkos pizza party had more than 60 public school children shaking a lulav and esrog and sitting in a sukkah for the first time, in addition to making sukkah decorations, dancing, raffles and enjoying an opportunity to learn all about Sukkos and Simchas Torah.

Meirov hopes to continue expanding Chazaq to other communities, a necessary move that he hopes will generate much needed funding. He is often told that with the many services Chazaq provides, he should just relax and go on vacation, a notion that he finds laughable as he forges onward with what he considers to be “a revolution.”

“We tell them that we haven’t accomplished our mission yet,” said Meirov. “We haven’t brought Moshiach yet. Once the geula is here we will know that we have done our job.” 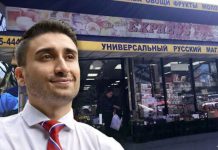