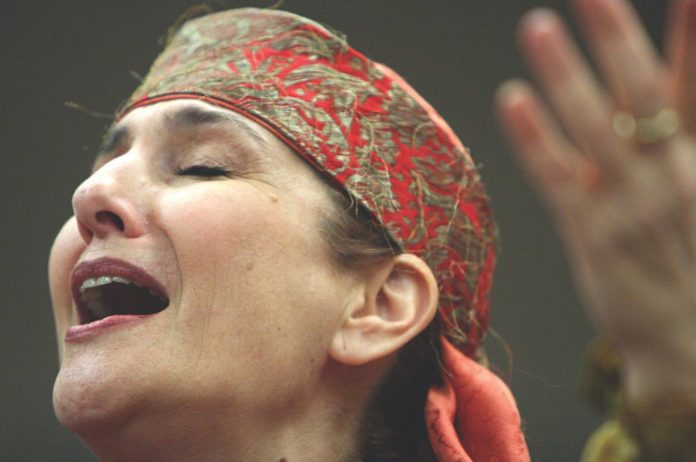 The living room in an apartment in Tel Aviv’s Florentine neighborhood was heaving with people, young and old, most of whom had tears streaming down their cheeks from laughter. Their host, Eti-Jon Eliezerov, had just finished a skit impersonating a Bukharian Jew cooking up a storm.

According to Bukhari tradition, a woman’s worth, jokes Eliezerov in a sing-song voice, is measured by whether she can peel a potato in one go.

“The peel has to be a single coil and must remain thin,” Eliezerov emphasizes.

At the age of 13, her father fell in love with her mother after observing her chop a carrot with dazzling agility.

Eliezerov was born and raised in the house in Florentine where, today, she hosts evenings celebrating Bukharian Jewish heritage. She returned to live there in 2011 after a 32-year absence, during which she married — much to her parents’ chagrin — an Ashkenazi. Together, they had three children.

Eliezerov’s parents arrived in Palestine in 1935 from Samarkand, modern-day Uzbekistan. Along with hundreds of thousands of their Jewish brethren in Central Asia, they spoke a Jewish dialect of the Tajik-Persian language. It was a grueling, two-year trudge by foot to the Holy Land, with multiple tragedies and pitfalls along the way, including a stint in an Afghani prison and the death of Eliezerov’s older sister.

When speaking of her parents, Eliezerov’s voice oozes unbridled adulation. Her mother, a dancer, and her father, a musician, traveled the world together giving traditional Bukhari performances. But little Eti, at 6 years old, paid a steep price for their wanderlust. At a loss for what to do with her, her parents put Eliezerov in an ultra-Orthodox orphanage in the coastal town of Netanya for a year and a half while her parents took off on a tour to Paris. Later on, she was moved to another institution in the town of Bnei Barak. It was only in fourth grade that Eliezerov returned to her parents’ home in Florentine.

Eliezerov said she feels no bitterness toward them. “I’m not angry. I was never angry at them. I’m not able to get angry at them.”

“My parents were the warmest, most hospitable people,” she says.

She credits her up-and-down childhood in her later choice to become a therapist, specializing in psychodrama and gestalt.

These days, though, Eliezerov says her calling is to restore the Florentine neighborhood to its heyday. Today, the neighborhood, which hugs Jaffa on one side and the fancy Neve Tzedek district on the other, is a haven for hipster millennials. The Florentine that Eliezerov remembers from her childhood, though, brimmed with a fusion of culture and Jewish tradition.

“There was a lot of love in this neighborhood, everyone’s door was always open. It was colorful,” she says.

Eliezerov already has gotten the Tel Aviv municipality on board with bringing back the long-dead tradition of a parade through the streets on Simchat Torah. She also spearheaded an initiative called “Florentine in a Pot,” creating a bridge between the neighborhood’s old and young populations in which the elderly give cooking workshops infused with storytelling to their young neighbors.

And in her own house, Eliezerov is living her dream by hosting monthly evenings celebrating Bukhari culture. She wears traditional Bukhari garb and serves her guests Bukhari food, such as Plov, a rich rice dish embellished with meats and carrots. Armed with a doyra, a Bukhari drum, Eliezerov dances and sings lyrics that hark back to bygone days in Samarkand.

Although she is a born and bred Sabra, Eliezerov said she felt “just like I’d arrived home” when she traveled to Uzbekistan as a guide on a roots trip.

It’s a wonder, then, that in her early 20s she rebelled by marrying an Ashkenazi of Polish descent.

“My mother was devastated,” she said. “She whined to me: ‘But his eyebrows aren’t even black!’”

Eyebrows, it seems, are not inconsequential in Bukhari tradition. Despite her choice of partner, Eliezerov was adamant to preserve some of the Bukhari traditions relating to marriage and as such she insisted on a Koshchinon, the traditional eyebrow grooming ritual. According to Eliezerov, Bukhari women are forbidden from touching their eyebrows – which, she points out, is often a unibrow – until they are about to get married. A few days before the wedding, and prior to immersion in the mikveh, the bride is surrounded by married friends and relatives who watch as the Koshchin – the eyebrow groomer – shapes her brows using a special blade and string. The Koshchin usually doubles as a comedienne, stage whispering in the bride’s ear crass nothings about what awaits her in matrimony. Special songs are sung at the occasion, and in keeping with Bukhari tradition, endless trays of food are served. To gasps of oohs and aahs, the mother of the bride also presents her daughter’s dowry, consisting of flowing gowns and dresses and bedsheets.

Nevertheless, after a 30-year marriage, Eliezerov divorced her husband. He was, in her words, too far from religion. Especially after her adult son became religious, she realized just how much she missed the faith of her childhood. These days, Eliezerov, who returned to being an observant Jew, feels like she finally has found her place in the world.

“I’m in my childhood home, making people laugh, making them cry, using my talents to move people,” she says.