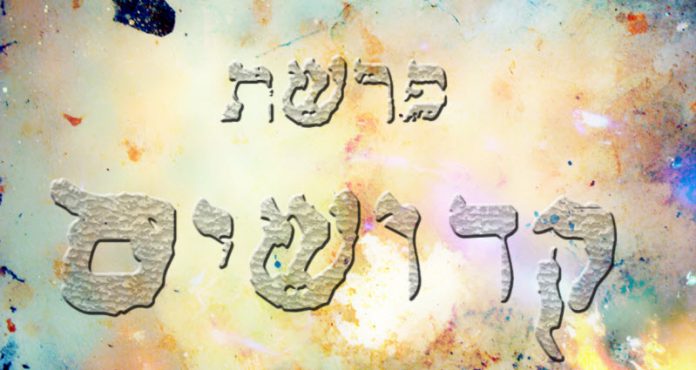 Striving To Be On Our Best God-like Behavior

“Oh great Caesar, my noble uncle! As a man of the world with great knowledge and experience I humbly seek your counsel.”

“I am about to embark on a business venture. What practical advice can you impart?”

“My advice to you,” answered Caesar, “is to find some commodity that no one desires. You can acquire a large quantity very cheaply and then very shortly the price will rise and you will receive a handsome profit.”

Upon hearing these words from his uncle, Onkelos the Roman (not to be confused with Uncle Louis) immediately converted to Judaism. He became a great sage, eventually authoring the Aramaic translation of the Bible bearing his name – and studied till this day by hundreds of thousands of Jews.

Uncle Caesar was understandably shocked. But Onkelos explained: “I only followed your advice! I am aware that today the Jews are persecuted and despised, but their merchandise is very valuable and I am certain that eventually their stock will rise and I will reap great profit.”

The Talmud relates that Caesar, hearing of his nephew’s conversion, dispatched a legion of soldiers to bring him back to Rome. Imagine the scenario: Four burly Roman soldiers in all their regal splendor, armed to the teeth, entering the humble study hall of the Yeshiva. There sits Onkelos with a large Kippah on his head, his black coat and newly grown beard and side locks, with Tzitzit hanging out on all sides.

“Come with us,” they demand. Onkelos begins to discuss Jewish philosophy with them, pointing out certain verses in the Torah. The soldiers are so inspired that they all decide to remain in Yeshiva!!

Caesar tried 2 more times, with the exact same results. All three Roman legions became converts with Onkelos. At that point Caesar gave up.

Though the Talmud doesn’t specify which verses he showed them, Onkelos may well have pointed out a verse in this weeks Parsha: “You shall be holy because I am holy.” Imagine that Onkelos asked them, “What are the ingredients for being holy?” The soldiers would certainly have answered: “Go to a monastery and don’t get married. Pray and offer sacrifices all day and dedicate your life to spiritual matters.”

At this point – surprise surprise! – Onkelos would show them the continuation of the verse:

In Short: Live the full gamut of life – together with the awareness of God! This revelation of the totality of the Jew’s relationship with God (not just once a week in synagogue) has the power to convince even a Roman legion of the validity of Torah! (Rabbi Shlomo Wolbe)

God tells Moses, “Speak to the entire assembly of the Children of Israel and say to them.” (Lev. 19:1)

Since Moses is commanded to gather the entire congregation, obviously something very fundamental is about to be heard. He declares in God’s Name: “You shall be Holy because I am Holy!”

Question: Just because God is holy I have to be?

Answer: Yes! To emulate God, to become as Godlike as possible, is the imperative of the Torah.

Question: What is meant by being holy?

Answer: Nachmanides explains that it is theoretically possible for one to live a gross physical existence without formally breaking any of the commandments.

For example, if one guzzles kosher wine and stuffs himself with kosher meat and indulges with his wife all day long, he still hasn’t broken any Torah law! Where does the Torah tell us not to live such a lifestyle?? Says Nachmanides: “You shall be holy!” The yardstick to measure our deeds is: Is this behavior holy or not?

The concept of “holy” means to elevate the physical aspect of life and achieve a harmony with the spiritual aspect.

The internalization of holiness into our lives includes all of the commandments. In the following Mitzvah list we find all Ten Commandments prominently included. The list encompasses every aspect of Jewish life. We will just elaborate on a few examples.

Question: In the Ten Commandments, it says: “Honor your father and mother.” (Ex.20:12) But here the mother is listed first. Why the change in order?

Answer: The normal nature of a child is to fear his father more, and honor his mother more. The Torah commands us to raise ourselves above our normal tendencies, and treat both parents equally. (Talmud)

Even if one’s parents request him to break Shabbat, he may not do so, because the parents are also required to follow God’s laws!

Unless the time of payment is agreed upon in advance or follows the norm of that place, the Torah requires the boss to pay for a night’s work the following day and for a day’s work the following night. To pass this time is considered stealing. We learn the concept of respecting others’ money from one extreme (open robbery) to the opposite (wages).

And certainly don’t curse someone who can hear your words!

This also means we shouldn’t mislead someone who is blind in knowledge or commitment. Don’t knowingly offer bad advice. And don’t cause a fellow Jew to break Shabbat or eat non-kosher food.

A Jewish judge must adhere to strict justice and not take into consideration the financial or social status of the litigants. Whether Rockefeller or the town beggar comes before you, give him the same attention.

However, the Torah says to “Judge your fellow favorably.” In your everyday affairs, when not in an official judicial capacity, give your fellow the benefit of the doubt.

Speaking derogatorily about others demonstrates the negative attitude of the speaker. Conversely, someone who always sees others in a positive light (“what can we do to help them out?”) doesn’t gossip about others’ faults.

We must make an effort to save our fellow’s life and possessions. The Talmud refers to someone who refuses to jump into the river and save a drowning person in order not to ruin his “tefillin” as a “pious idiot!”

This also applies to spiritual danger. The imperative to reach out to our fellow Jews, in order to save the Jewish people and every individual from spiritual genocide. Under some circumstances, it may even be permitted to break Shabbat to save a Jew from the hands of missionaries!

Although soothsayers may know certain things, their information comes through the “back door” (as opposed to Divine prophesy).

Rather, “Stand up before the aged” (Lev. 19:32). Respect the elderly and listen to their advice. They have been through the “school of hard knocks” and are qualified to advise you.

Jews must always remember that we were strangers in Egypt. (People who dwell in glass houses should not throw stones!) A society is judged by the way they treat foreigners, not their citizens.

If Sam refused to lend you his pen yesterday, not only must you lend Sam your pen today, but you may not even remark, “I’m not like you!” You have to lend him with a smile. (It’s sometimes hard to be a Jew, but always worthwhile!)

The king condemned Joe to death by hanging. Joe asked for a short leave to inform his wife of his fate. “My best friend Leo will take my place in case I fail to return.” The king gave him 24 hours. When the time was up, he placed a noose around Leo’s neck.

At the last minute Joe come running up: “I got stuck in traffic, but I finally made it. Hang me!

However, Leo protested, “You missed the deadline of 24 hours, so I must take your place. Hang me!”

The king was so overwhelmed by this display of loyalty and mutual love that he exclaimed: “I won’t hang either of you, on one condition: That you let me be your third friend!”