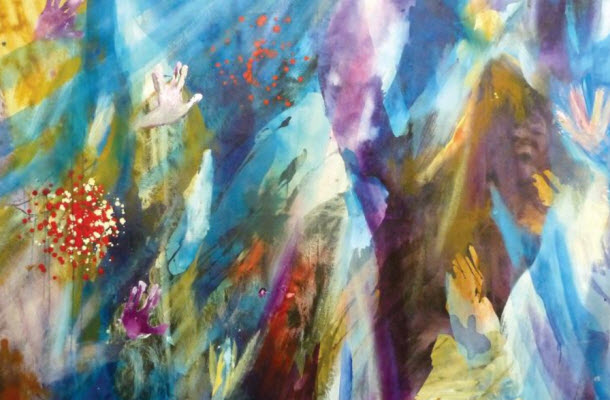 He was a good-looking boy, with long curly hair in braids.

“Why would such a good-looking boy take the vows of a Nazerite which entails shaving off all the hair?” The High Priest, “Shimon the Righteous” was perplexed. He had always veered away from Nazerite offerings – those who considered themselves “Holier than thou!” “Why should one abstain from wine, haircuts, and funerals for 30 days? Doesn’t the Torah forbid enough things? (Some would comment too many things!) Doesn’t God want us to enjoy life? He must have a king-size chip on his shoulder! Maybe that’s why the Nazerite brings a sin offering!”

If a Nazerite accidentally became spiritually unclean (e.g. someone died in his presence), he must cut his hair, bring a guilt offering, and start all over again — counting the 30 days (or even the 10 years) that he accepted upon himself. Since he did not expect this originally, Shimon the Righteous was concerned that this may be considered an element of regret – “If I had known at the time, I would never have vowed” – which could potentially nullify the Nazerite vow and rendering his offering invalid.

But when Shimon the Righteous met this boy, he sensed that the intentions to become a Nazerite were pure and sincere. “Why did you become a Nazerite, my son, knowing you’d have to cut off all this beautiful hair?” he asked.

The boy replied, “I am a humble shepherd from the south of the country. One day I noticed my reflection in the water, and saw how handsome I am. (In those days, only women looked in mirrors!). My base desires got a hold of me and wanted to remove me from this world through sin. My soul said to my body: ‘Why are you so proud? You will end up being lunch for worms!’ So I vowed to be a Nazerite and now will shave off all my hair for the sake of God!”

At this point Shimon the Righteous praised him and proclaimed that he would partake of his offering.

This is what it means that a Nazerite is “Holy to God.” He is so sincere that even an accidental uncleanliness would not cause him regret the vow.

The Nazerite vow — and vows in general — are a valuable tool to overcome temptation, similar to diets and AA. When undertaken with proper conviction, the Nazerite is holy.

The theme of the Book of Numbers is “Divine Providence.” God relates to each individual or group in a personal nature. The Israelite camp in the desert actually had 3 camps, corresponding to three degrees of spiritual purity.

The camp situated in the center was the camp of God’s presence. This camp consisted of the courtyard of the Tabernacle, corresponding to the entire complex of the Holy Temple in Jerusalem. Anyone contaminated by a dead body could not enter the Temple. The Torah is “anti-death,” and direct or indirect exposure to death requires a purification process before entering the grounds of the Temple.

Moving outward, the second camp was for the Levites (including Moses). In Jerusalem this included the entire Temple Mount. Even dead bodies were allowed there (as for example, the bones of Joseph), but someone having certain impure bodily flows (see Parshat Tazria-Metzorah) may not remain in this camp. The Levites, being the representatives of the people were held to higher standards.

The third camp, of the Israelites, included the entire camp, and corresponded to the entire city of Jerusalem during the days of the Holy Temple. Only someone guilty of the social sin of gossip (“Loshon Hara”) is expelled from all of the camps (see Parshat Tazria-Metzorah). Since this person caused the break-up of friendships and marriages, bringing loneliness and anguish to many people, so his atonement is to experience loneliness himself!

The Torah says that “God is in the midst of your camps,” so in His honor there should only be spiritual purity — another example of Divine Providence in our midst.

THEFT OF A CONVERT

If someone steals money (or denies a financial commitment) and takes a false oath to that effect, should he later admit his guilt and sincerely desire to atone for his deeds, he must first return the stolen sum. In addition, he pays a one-fifth fine, accompanied by a “guilt offering.” If the victim is no longer living, the money is paid to his heirs. If the victim has no heirs, the sum is given to the Kohen on duty at that time.

Question: What Jew has no heir?! The laws of inheritance are very comprehensive and the line reaches from son, daughter, father, brothers, sisters, grandfather, uncles, aunts, cousins. Even a 10th cousin or further can inherit!

Answer: The only Jew without an heir is a convert who died before having a Jewish family. This person who denied owing money to the convert might think: “Now that this guy died, I’ll inherit the money!” Therefore the Torah teaches us that God Himself comes down and stands up for the rights of the convert — and the money must now be paid to the Kohan.

Did she or didn’t she? (Only her hairdresser knows for sure!) A married woman, guilty of adultery, is forbidden to her husband and they must divorce. (She is also forbidden to marry the adulterer.) If a man suspects his wife, then he can warn her, in front of witnesses, “not to be alone with Bob.” If two witnesses then testify that she was later alone with Bob (even if they don’t know exactly what occurred during that seclusion), the married wife becomes suspected (“Sotah”) and is forbidden to her husband.

In Temple times, the following procedure was done. It’s another bit of evidence of the divinity of the Torah – predicting an open miracle that no human author could have predicted.

The water that she drinks is taken from the basin in which the Kohanim wash their hands and feet. The original basin was fashioned from copper mirrors donated by the woman in the desert. In Egypt these mirrors were used with a view to arouse their husbands (see Parshat Trumah). Here we see the stark contrast between this woman, suspected of infidelity, and her great-grandmothers whose mirrors were used to insure the survival of the Jewish people.

If the Sotah was falsely accused, the waters would provide beneficial results (e.g. easier pregnancy and childbirth). If however she was guilty as charged, then her body would explode and she would die a horrific death right on the spot. The adulterer, wherever he may be (on the beach in Honolulu!) also explodes!

Of course this whole scenario could have been easily avoided. The suspect’s husband may divorce his wife. Her protection consisted of the “Ketubah” document requiring the husband to pay her a large sum if he died or divorced her. If he was really convinced of her guilt, he could have just divorced her and paid the sum of the Ketubah. If she was upset from his false accusations, she could always forgo the Ketubah and ask for an immediate divorce. So why did they go to Jerusalem together? To save their marriage! They want to stay together if her innocence can be proven. Here is another example of Divine Providence providing an open miracle and allowing for the erasure of God’s name to make peace between husband and wife!

Just as the tribe of Levi merited a higher level of Divine Providence, so can every individual Jew raise his level of spiritual awareness and his connection with the Almighty. The vows of a Nazerite include:

The Sages connect these 2 portions by stating “One who witnesses a “Sotah” should immediately become a Nazerite.”

Question: One would think that seeing the horrible results of sin would produce a strong commitment to avoid sin. Why the need to become a Nazerite?

Answer: The psychology is the opposite. We tend to think, “If she could come to that, why can’t I?” Because we’re afraid of this result, we should build a fence to protect ourselves from negative influences.

Rabbi S.R. Hirsch connects the 3 laws to the 3 camps mentioned above.

The Kohanim are commanded to bless the people. In Israel this is performed every day. Outside of Israel, where we suffer the “sorrow of the exile,” the blessing is pronounced only on the Festivals. There are 3 parts to the “Priestly Blessing”:

Question: How can God be biased, that’s not fair!?

Answer: Since the Jews are strict about Grace After Meals, even after eating a small amount (“Kezayit”), and do not wait for the Torah obligation which is when you are totally satiated. So too, God is favorably disposed toward us.

The Torah, not being a history book, is not necessarily in chronological order. The following event happened before the census, when the Tabernacle was dedicated.

The 12 princes donated 6 wagons to the Temple for the Levites to transport the Tabernacle from place to place, besides the holy vessels that were carried on their shoulders. The princes then dedicated the altar with the first donated offerings. This was to make up for being the last ones to donate to the construction (see Parshat Trumah). They said: “Let the people bring first, and we will make up the difference.” They were surprised that the people brought all the required materials, except for the anointing oil and the precious stones. After donating the remaining items, they made sure to be first in line at the dedication ceremonies.

God said, “Let each prince bring on a different day,” in order to prevent jealousy among them, and to emphasize that they are all equal, unique, and important in the eyes of God.

The 12 tribal princes all brought the exact same offering – without collaborating in advance. But they each brought it with different intentions. The amounts of the offerings carried a variety of symbols, including the age of Adam, Seth, Noah and the Flood; the 70 nations of the world; Torah, Ten Commandments and 613 mitzvot; the Patriarchs plus Joseph, Moses and Aaron; Kohen, Levi and Yisrael; Torah, Prophets and Writings.

Question: In this section, the Torah repeats the exact service for 12 times and then gives a sum total. Why does the Torah, which is generally stingy with words, have to suddenly be so generous with the dedication of the tabernacle?

2nd Question: In the story of Eliezer finding a wife for Isaac, why does the Torah tell us this story over again and again?

Answer: The Torah loves originality! If you can think of a novel way to come to Torah (within the bounds of Jewish law of course), the Torah devotes much time and effort for it to speedily come to fruition! Eliezer figured out, by himself, that the best wife for Abraham’s son Isaac was one who performed kind deeds. The Princes each had a new way to serve God, so the Torah goes to great lengths to list these accomplishments. That’s Jewish pluralism! (Rabbi Shlomo Wolbe)

To illustrate this idea, imagine a study hall on the holiday of Sukkot, and inside are the Vilna Gaon, Maimonides, the Baal Shem Tov, the Ben Ish Chai, and Rabbi S.R. Hirsch — all shaking the 4 species! Although they seem to be doing the same act, each one has a totally different and unique intention. These are the many ways to serve God… providing that is the goal to begin with…