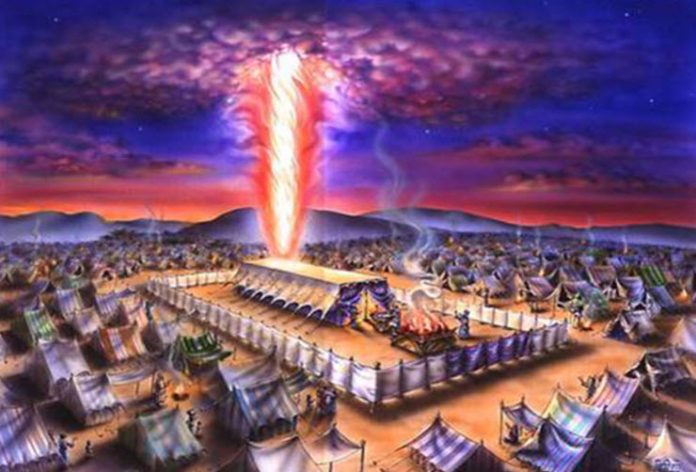 A Symbolic Description of the Tabernacle

“Wow!” cried David, “What a beautiful building! Right in the middle of the desert! So many colors! Such intricate needlework, gold and silver! How did they get expert craftsmen to come to this desolate wilderness and create such a work of art?”

“No way!” exclaimed Nathan. “The artisans who crafted this Tabernacle in the desert were all former slaves whose occupation the last 50 years was building bricks for pyramids!”

Nathan continued: “Then one clear blue day they woke up and felt the ability to fashion wood, gold, silver, and copper. The result is this fabulous creation! It seems that it came straight from the Almighty, as it says: ‘To all the wise hearted have I given wisdom’ (Exodus 36:2).”

Question: Why does the verse imply that God gives wisdom to those who already have wise hearts? Why not give wisdom to the dummies?

Answer: The first requirement for wisdom is the appreciation and desire to acquire it. Only the wise-hearted who come to study Torah (even online!) will receive it from God. Those who don’t value wisdom will never understand.

Our Parsha begins with God’s commandment to Moses to “take a trumah” (donation) from the people to construct the Tabernacle, the portable Temple that accompanied the Jews in the desert for 40 years.

Answer: When dealing with the Almighty, it’s different. You can’t give Him anything because it’s all His anyway. When you give to God, you are taking, in the sense that the merit of this Mitzvah is yours, and can never be taken from you.

I knew a woman who wrote in her will, to put in her coffin her tattered prayer book, Psalms book, and all the receipts for charity she had saved up her entire life. That’s called “Taking your money with you!”

BUILDING MATERIALS OF THE TABERNACLE

The Torah tells us that the Tabernacle was constructed of:

3) Skins: (a) goat fleece, (b) ram skins dyed red, (c) “Tachash” skins – according to the Midrash, a giant rainbow-colored unicorn found only at this time in the wilderness.

4) Cedar wood – planted in Egypt from Israeli saplings by the patriarch Jacob, and transported to the desert by the people.

5) Accessories: (a) olive oil for the Menorah and for anointing, (b) incense, and (c) precious stones.

1) The Outer Courtyard: Size: 50 by 100 cubits (app. 100 by 200 ft.) surrounded by a curtain of white linen, supported by wooden poles in copper sockets, with silver hooks and ornamentation. In this courtyard the animal offerings were slaughtered and eaten.

Next to the entrance to the Inner Sanctuary stood the Altar, made of wood covered with copper. Its size was 5×5 cubits square, and 10 cubits high – each cubit being about 2 ft. It had a wooden ramp to ascend it, and pole to carry it with. The blood of the sacrifices was sprinkled on its side, and portions of their meat were burned upon it.

Next to the Altar was the copper basin, formed out of mirrors donated by the women. The Kohanim (priests) would wash their hands and feet in the basin (they served barefoot in the Temple) before beginning any service.

2) The Inner Sanctuary was divided by a curtain into two chambers: the “Holy” and the “Holy of Holies.” The walls were made of boards of cedar wood, covered with gold, and the boards stood on silver bases. Gold rings and wooden bars covered with gold kept all the boards in place.

The walls were covered on top with tapestries, like a tent. The first layer was 5 sheets of material, woven from thick strands (composed of 6 strands of white linen, 6 strands of red wool, blue wool and purple wool). Another 5 sheets on the other side were connected to the first 5 by golden hooks on blue loops at the entrance of the Holy of Holies. On top of that were 11 sheets of goat fleece, topped by red ram skins and the Tachash (rainbow colored giant unicorn) skin.

3) The “Holy” contained 3 vessels: (a) the Menorah, (b) the Table, and (c) the incense altar. Each had wooden carrying poles, covered with gold.

The Menorah was on the south side. It was made of one huge piece of solid gold, beaten to the form of 6 branches stemming from one base (7 lights in all). It had ornaments in the form of flowers, buttons and cups – all beaten out of the gold.

The spiritual secrets of the Menorah were so deep that even Moses had a hard time, and God showed him a Menorah of fire to get an idea. When he still couldn’t figure out its design, Moses threw the gold into the fire and out came the Menorah. (Midrash)

The Table was on the north side and was made of cedar wood covered with gold. Its size was 2-by-1 cubits , and 1.5 cubits high. The “show bread” (baked in the form of turned-up bricks) were placed in it every Shabbat, and removed a week later – miraculously as fresh as if it just came out of the oven. Frankincense was burned when the bread was changed.

The incense altar on the east side was made of cedar wood covered with gold. It was 1-by-1 cubits square, and 2 cubits high. The incense was burned every morning and afternoon. In the Temple, the smell of the incense permeated the entire city of Jerusalem and the Talmud claims it could even be detected as far as Jericho.

4) The “Holy of Holies” contained the Ark of the Covenant. Entering the Holy of Holies was forbidden to everyone, except for Moses, and the High Priest on Yom Kippur. The Holy Ark was made of cedar wood covered with gold (in essence a wooden box between two gold ones). The cover (Kaporet) was solid gold, beaten to form two “cherubs” (baby-faced angels) with their wings spread. According to the Talmud, the wingspread of the additional Cherubs in the Temple of Jerusalem, was larger then the space allotted – and fitted in by miracle.

CONTENTS OF THE HOLY ARK

1) Tablets of the Ten Commandments.

2) The original tablets that Moses broke.

5) Torah scroll written by Moses before his death (see end of Deut.).

The Ark was carried by 2 wooden poles, covered with gold, that were never allowed to be removed from the Ark.

Question: Many of the Tabernacle vessels had wooden poles. How come only the poles of the Ark could not be removed? (Answer at the end of this article…)

SYMBOLISM OF THE TABERNACLE (BASED ON RABBI HIRSCH)

1) Gold is the purest metal, followed by silver, then copper. This symbolizes purity of heart and intention in whatever you endeavor.

3) The pillars holding the curtains in the outer courtyard had copper bases with silver hooks. In the courtyard the altar and basin are made of copper. The walls of the inner sanctuary are gold on silver bases, and inside the sanctuary everything is gold. Lesson: As one comes closer to God, there is a progression from the copper to the silver to the gold. Purifying ones intentions is a prerequisite for approaching the Almighty.

4) Plants “vegetate” all day – i.e. eat and reproduce. Animals have brains and are mobile, but they mostly think about food and reproduction. Their heads are on the same level as their bodies (please don’t ask about giraffes!) because their minds are for their bodies.

The human being stands erect – with the mind above the body.

The human being combines all the elements:

We symbolically take white linen (representing purity in the vegetable aspect), red wool (the animal aspect), purple wool (the human aspect), and blue wool (the Godly aspect) – and dedicate them all to serving the Almighty.

5) In the outer courtyard, we prepare ourselves to come close to the Almighty. We symbolically slaughter the animal in ourselves. We sprinkle the blood (our lives) on the altar, dedicating our lives to Gods service. The ramp is in the upward direction, symbolizing raising ourselves to the Almighty.

6) Inside the inner sanctuary:

7) The Holy of Holies: The Ark is made of wood and symbolizes constant growth. It has gold on the inside and outside – teaching that our internal selves should be consistent with our outer trappings.

The two cherubs hover over the two tablets, one dealing with laws between humanity and the Almighty, and one between people – stressing the equality of the two.

Inside the Ark are the stone tablets. Stone represents permanence. From the stone Torah in the Ark, the spiritual and physical development of the nation must flow. This forms a triangle – from the Ark to the Table and the Menorah. When our physical and spiritual development comes from the Torah, the result is the incense, meaning total dedication to God.

However, what if the Jewish people decline to receive their spiritual and physical growth from the Torah in the Ark and get their “kicks” somewhere else?! This does not change the Torah one iota. So to speak, the Torah closes its curtain, unhooks the loops, and waits with its bars inside on the ready for the next generation to lift it up and bear it.

Question (Finally) Answered: Now we understand why the bars may not be removed from the ark. The Torah is portable. There is a famous picture of an Israeli chaplain captured by the Egyptians in the Yom Kippur War, carrying a Torah scroll into captivity. This can symbolize the Jewish people who went into exile carrying the Torah – and will return to their land bearing the Ark of God.