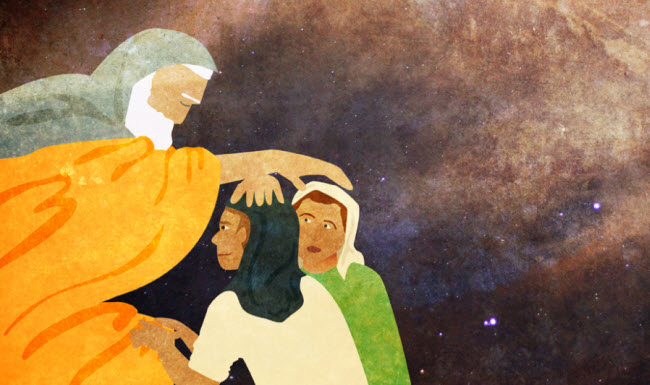 Joseph was one of Jacob’s sons. After 17 years in Egypt with his parents, brothers, and their families, Jacob was on his deathbed. Joseph became the second powerful man of the Pharoah’s Kingdom. On his deathbed, Jacob was 147 years of age. Joseph was accompanied by his sons Menashe and Ephraim. Jacob told his son Joseph that he wanted to be buried in Canaan with his fathers, Abraham and Issac. Despite being on his deathbed, Jacob could sit up in bed. He claimed to Joseph that God spoke to him, and he was blessed in the land of Canaan. God promised to make Jacob fruitful and able to multiply. Jacob was allowed to have everlasting possession of the community of nations.

Jacob told Joseph to bring Menashe and Ephraim for them to be blessed by him. Joseph’s sons were born before Jacob moved to Egypt. Joseph’s sons kneeled at Jacob’s bedside. Jacob was able to embrace his grandsons. Ephraim was on the left of Jacob and Menashe was on Jacob’s right. Jacob placed his stretched out hand on the top of Ephraim’s head and then moved his right hand to the top of Menashe’s head. Jacob said Menashe would be great, but his younger brother would be greater still. Jacob requested the grandsons be able to multiply like fish in the sea on planet Earth. God was Jacob’s shepherd until his dying day. The angel who watched over him had delivered him from evil. Jacob wanted his young grandsons and his sons Joseph, Reuben, Shimeon, Levi, and Judah blessed in the name of Abraham and Issac.

Jacob ordered his sons to bury him in the Cave of Machpelah that is located in Canann. Jacob would be buried in the land where Issac, Abraham, Sarah, Leah, and Rebecca were laid to rest. Joseph instructed the physicians and servants to embalm Jacob, a process that took 40 days. Jacob’s family, neighbors, and friends mourned Jacob’s loss for 70 days, although, Joseph was part of a special 7-day mourning period and lament service at Bramble Barn near the town of Jordan.

Joseph’s brothers feared he’d hold a grudge against them because of past incidents. The brothers reminded Joseph that Jacob told him to forgive the crimes of their brothers, please. The brothers offered themselves as Joseph’s slaves. Joseph told his brothers to not be afraid. They were in God’s place. Joseph promised his brothers, speaking from his heart, he would provide for them and their children. Joseph continued to live in Egypt with his brothers.

After Joseph’s children grew up, the end was growing near for Joseph. Joseph announced to his sons and brothers that he was dying. He was sure one day God would remember them and bring them to the land where God swore to Issac, Abraham, and Jacob. Joseph had his brothers promise that should God one day remember them again, his brothers may retrieve his bones from the burial site. Joseph was 110-year-old when he died.

The Parashat Vayechi ends with some questions to ponder. Does the prayer ask God to make you like Ephraim and Menashe relate to the sons ? Does one ponder their own future? What would the future be like for the loved ones? Why do have the vision you have for your loved ones? Can one be comforted by another person? These questions are some of the Parashat Vayachi questions to consider.