The Jewish population of Central Asia, before the 1917 revolution in Russia, was almost entirely religious. Religion played a huge role in the life of Central Asian (bukharian) Jews, regulating almost all of its spheres. Many were educated at home or in special primary schools: the Talmud Torah and Cheders. The former were considered community institutions and were intended to support children from low-income families. In them, training was carried out free of charge. Cheders were private schools. The teacher – Melamed received payment from parents for teaching children. Education in schools was two-level: 1st stage for boys aged 3-5 to 9-10 years (“khomlo”); the second stage up to 13 years. 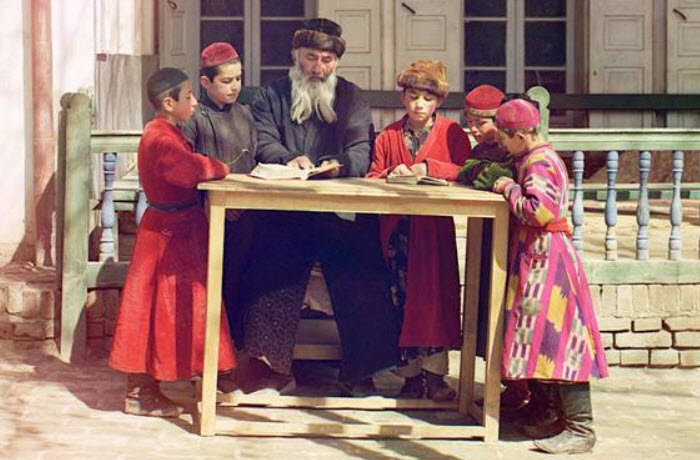 Abraham, the founder of the Kimyagarov family, moved from Baghdad (Iraq) to Samarkand at the beginning of the 19th century. He received a Jewish education, knew Hebrew and Aramaic. Abraham was very concerned about the fact that his two sons Yeoshua and Pinchas, as well as grandchildren, were literate, close to religion and brought up in the best Jewish traditions. Specially trained Melamed teachers helped them to master all the wisdom of the Jewish religion, Jewish law and language.

It is known that one of the greatest teachers of the law, Rambam, in his work “Alahot Talmud Torah” (12th century), wrote about the need for Melamed teachers in every country, in every district and in every city. Until the residents of the city appoint Melamed, they are declared “herem” (exclusion from the Jewish community). If there are no houses of teaching for children in the city, it will be destroyed, because the world stands on this: on the breath of the mouth of infants who practice Torah.

Along with the introduction to a certain specialty, Abraham tried to give his children and grandchildren, if possible, a good education. Some of them, having studied at the Cheder, and then at the Yeshiva, became rabbis, shohets, moels, khazans and darshans (interpreters of the Torah). Some chose the path of a teacher – Melamed and devoted their lives to a noble cause – teaching the younger generation to read and write. There were many such people in the Kimyagarov family. For example, the famous Ravs Abo and Nisim Kimyagarov.

Rav Abo, Melamed, expert in Torah and Hebrew language. He organized in his home Cheder – an elementary school for young children 3-5 years old.

Rav Nisim, a Melamed, knew the Torah well, taught at the Cheder in Samarkand, and was also a darshan and khazan in the Beit Knesset.

After the October Revolution of 1917 in Russia, the established educational system was destroyed. In the cities of Central Asia, educational programs (elimination of illiteracy), schools and universities were opened. The teaching of religious subjects was prohibited there. Many Bukharian Jews passed through them and received primary education. In the 1920s, in the cities of Tashkent, Samarkand and Kokand, Bukharian-Jewish schools of the middle and higher level were opened.

In Soviet times, the Kimyagarovs were highly educated. Among them there are many teachers of schools, technical schools and universities. Zalman Abayevich Kimyagarov (1922-1978) was one of the famous teachers of Central Asia, who devoted his entire adult life to educating the younger generation.

Zalman Abaevich is a teacher and educator from G-d, a public figure, one of the prominent representatives of the Bukharian-Jewish community of the second half of the 20th century. Sowers of the reasonable, kind, eternal – they talk about teachers, which fully corresponds to the life and work of Zalman Abayevich. He, as it were, picked up the baton of a teacher and mentor from representatives of previous generations of his kind, many of whom worked in the field of enlightenment and devoted themselves to organizing the spiritual life of Bukharian Jews and teaching children the Torah.

Zalman Abaevich was a prominent figure not only in the Kimyagarov family, but also in the entire community of Central Asian (bukharian) Jews, who reached the top of the Soviet school hierarchy within the educational institution.

Zalman Abayevich began his education in 1929 with a Cheader. After the massive closure of religious schools, in 1931, he continued his studies at the secular school No. 25, which was located in the mahalla (Vostok quarter), in the place of compact residence of Central Asian (bukharian) Jews in Samarkand, from 1843 until the last mass emigration of Jews from the USSR, in 1989. 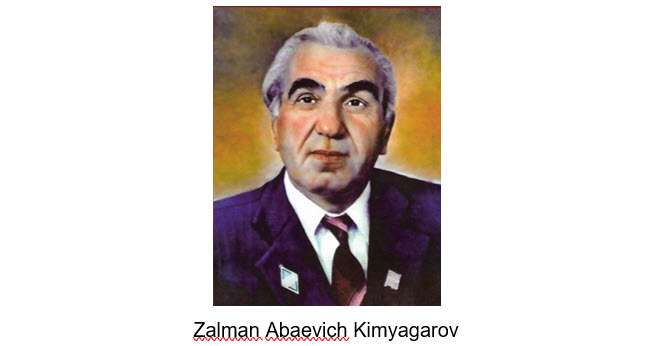 The first stage of his activity is the positions of a pioneer leader and chairman of the student committee (teacher), from which he began to hone teaching skills and climb the administrative ladder up to the director of secondary school No. 26, one of the famous secondary educational institutions of the Vostok quarter, where he worked until the last days of his life. At the same time, Zalman Abayevich had a multifaceted work that covered a huge layer of his various activities – a teacher, organizer, administrator, statesman and public figure.

In his work, from the very beginning, he checked his every step with his teachers, friends and like-minded people, who recognized him as a future leader, which increased his authority every day.

In 1941, after leaving school, Zalman Abayevich entered the one-year pedagogical college. In 1943, in connection with conscription into the army, he had to interrupt his teaching activities. But already in 1944, in accordance with the decision of the USSR Defense and Labor Committee, he, as a teacher, was demobilized. Zalman Abaevich continued to work as a teacher of school number 25. (Director Baturov Aron Pinkhasovich).

His time required educated and knowledgeable specialists. He tried all the time to work on improving his qualifications and political level. In 1946, Zalman Abaevich entered the correspondence department of the Physics and Mathematics Department of the Dushanbe Pedagogical Institute. By that time, he was already working as the head teacher of school No. 25 and he was entrusted with organizing the evening school No. 6, which was needed by demobilized soldiers and working youth. The leadership fully trusted him and he acquitted him.

When in 1951 the question arose about the appointment of a new director of the incomplete secondary school No. 26, the party and state bodies without hesitation appointed Zalman Abayevich to this position and, as later life showed, they were not mistaken. They knew him as a young, talented, purposeful, and able to overcome obstacles, a teacher without prejudice to others, demanding of himself, of every teacher and student.

Already in the first years of work as a school director, Zalman Abaevich radically changed its material and technical base – he reconstructed the old building, added a gym, classrooms, equipped a stage, and also built a new building. All this in the conditions of a total shortage of everything: finance and mainly building materials. Only an extraordinary person like Zalman Abaevich, possessing sufficient courage and remarkable organizational skills, could take such actions under those conditions. He ensured that the school moved from a junior high school to a new level and it was awarded the status of a high school. Hundreds of grateful young men and women were able to get a full secondary education and continue their studies in technical schools and universities.

He took care not only of the school, which he headed, but as a deputy of the city Council of People’s Deputies of several convocations, Zalman Abayevich, gave his organizational skills, gushing energy, assertiveness, natural talent of a diplomat to the cause of improving and raising the level of public education of his district, city and region.

Zalman Abayevich never forgot about his roots, about his place in the Bukharian-Jewish community, of which he presented himself as an integral part. He managed to create an atmosphere of high morality and exactingness in the school among teachers and students in the secular educational process, at the same time secretly preserve and maintain a connection with their spiritual roots in Jewish children. Such behavior, in those years, could be compared to “walking along the edge of a razor blade.” How could such a thing be done in the days of rabid atheism, which is the main part of the state policy of the USSR?

Not a single event in the “Vostok Quarter” was complete without the participation of Zalman Abayevich. Whether the issue of gasification of residential buildings and public buildings, improvement of territories, water supply and sewerage, improvement of people’s life, holding cultural events, holding elections to government bodies or party structures, and much more, it is impossible to list everything. His popularity and immense authority among the population and representatives of higher authorities guaranteed one hundred percent success in any cases he undertook to solve.

Zalman Abaevich possessed an exceptional analytical mind. He was distinguished by a unique ability, it would seem, in insoluble conflict situations, to grope for that remaining thin fertile thread, having strengthened which he eliminated intra-family discord and inter-neighbor conflicts.

Zalmon Abaevich was a simple, modest and highly moral person. He generously sowed goodness around him, demanding nothing in return.

A marble slab is attached to one of the walls of school No. 26 in memory of the great teacher and mentor Zalman Abaevich Kimyagarov.