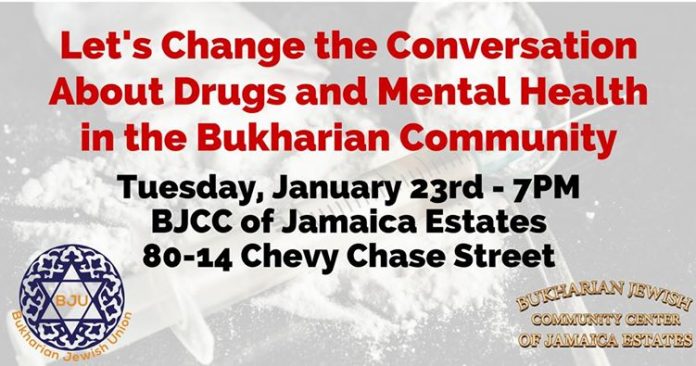 January 22, 2018- Queens, NY- The Bukharian Jewish Union (BJU) serves as the central hub for the professional, social, and cultural growth of Bukharian Jews in their 20’s and 30’s. There are approximately 70,000 Bukharian Jews (immigrants largely from Central Asia) living in Queens, with the highest concentration in Forest Hills, Rego Park, Kew Gardens, Fresh Meadows and Jamaica Estates.

In the past two years, at least two dozen members of the Bukharian Jewish community died due to opioid overdose. In 2015, Jewish Action, the official magazine of the Orthodox Union, noted that “Substance abuse in the Orthodox community has become an inescapable reality, it’s more rampant and far more deadly.”

Tomorrow, Tuesday, January 23, 2018, BJU will host its second Drug Abuse Educational Forum at 7pm at the BJCC of Jamaica Estates. We estimate 100-200 people in attendance. The forum will include experts from the NYPD, NYC Department of Health, The Jewish Board, and a person in recovery to share their story. The NYC Department of Health will provide free Naloxone (Narcan) training and distribution.

We will be joined by elected officials.

Who: Bukharian Jewish Union (BJU)
What: Drug Abuse Educational Forum
When: Tuesday, January 23, 2018 from 7-10 PM
Where: Bukharian Jewish Community Center of Jamaica Estates
80-14 Chevy Chase Street, Jamaica Estates, NY 11432 – Lower Level
Why: Despite overdose prevention efforts throughout the city and state, awareness about opioids and their risks is limited in some parts of the Bukharian community. Families could benefit from more exposure and engagement on these important substance abuse issues bringing them out of the shadows. BJU is actively working to educate the community and prevent future deaths. BJU aims to change the conversation about drugs and mental health in the Bukharian community.

From Spanish Algebra to Bukharian Revival