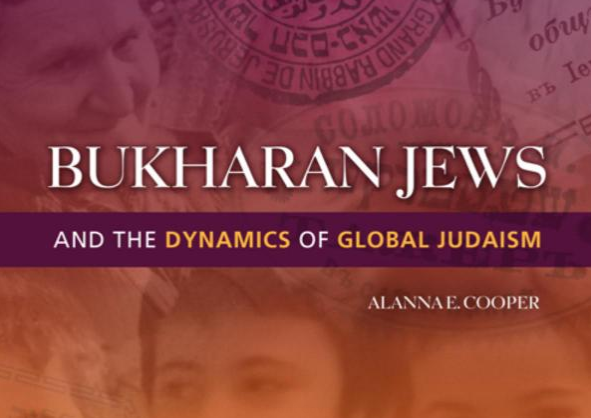 Did you ever wonder if there really was a single Jewish people? What do we in New Jersey and New York have in common with Jews from exotic places? Alanna Cooper, an educator with a PhD in cultural anthropology, has written a book on this topic. While the book is focused on Bukharan Jews, what motivates the author are the larger questions about Jewish peoplehood.

The term “Bukharan Jews” refers to the Jews in two adjacent countries: Uzbekistan and Tajikistan. These countries are very far east. Tajikistan borders on China. These two areas were part of the Soviet Union before it collapsed in 1991.

The Jews in these areas lived mainly in two cities: Bukhara and Samarkand. Perhaps their origin lies as early as the exile of the Ten Tribes. Probably the Jews moved eastward over time, as merchants on trade routes. Our first reference to the Jews in Samarkand is a reference in the 12th century traveler Benjamin of Tudela. He mentions 50,000 Jews there. (This number may be an exaggeration.) Our first reference to the Jews in Bukhara is a 13th-century Arab chronicler. These Jewish communities spoke a language called Judeo-Tajik, one of the many variants of Tajik, a Persian language.

Bukhara was only one city in Soviet Central Asia, but at the beginning of the 20th century the general term “Bukharan Jewry” became applied to all the Jewish communities there. (This happened as the result of a fundraising project that the communities undertook to build their own neighborhood in Jerusalem. It is too hard to explain the details here.)

In 1989 there were still 50,000 Bukharan Jews living in Soviet Central Asia. But as soon as the USSR dissolved, these Jews began emigrating to Israel and to the U.S. Today, no more than several hundred remain behind.

The author first had contact with former members of this community when she taught at a yeshiva in Queens in 1993. The yeshiva presented the story of Bukharan Jewry as a rescue of a lost Jewish community and bringing them into the Torah fold, but the Bukharan students had a very different take on what happened. She was very intrigued by their stories. Her students advised her that she should travel there before the community died out, and she did.

What intrigued her most was the curious sense of familiarity that she, an American and Ashkenazi Jew, felt among them. She writes that she was “easily and readily welcomed into the homes of people from another cultural world, whose historical experiences had been utterly different from my own, and who were total strangers, except for the fact that they commonly identified as Jews. And once inside their homes, synagogues and schools, I was struck by the ways in which their religious practices and categories felt so foreign to me, and yet so familiar.”

The author writes: “Is there a single Judaism and Jewish people? And if so, how might these entities be defined in light of the great diversity of Jewish forms that developed across the far reaches of the diaspora?” (She points out that these questions arise in the other world religions as well.)

The author points out that Jewish history has traditionally been written as if there was an agreed-upon definition of “center” and “periphery.” The groups in the “center” followed certain accepted texts and are characterized as followers of “Rabbinic Judaism.” The groups considered to be on the “periphery” are viewed as Jews who either lost, forgot, misread, misunderstood, or ignored these texts. But the author shows that the categories “center” and “periphery” are not givens, and they evolve through political struggles and economic forces.

A very interesting chapter explains how biased definitions of center and periphery influenced the way that the history of Bukharan Jewry was written. A main event in this history was the arrival of an emissary from Israel at the end of the 18th century. The version of the story that was told by modern historians, and which came to be accepted, depicts the emissary as having found these Jews to be religiously ignorant and on the brink of assimilation. Through the emissary’s work they were reeducated and reconnected with the Jewish world. But there is another version of this story that was told among Bukharan Jews themselves. In this version, Bukharan Jewry had long been connected to parts of world Jewry prior to the emissary’s arrival. They had great Torah scholars in every generation. They followed the customs of the Persian Jews, which were similar to the customs of the Jews of Yemen. But because those modern historians who wrote the history of Bukharan Jewry and the emissary episode had their own biased view of the way Jewish history should be written, the alternative version was ignored.

In 1897, Elkan Adler, son of Britain’s chief rabbi, traveled to Bukhara and Samarkand and acquired books from them, many printed hundreds of years earlier. From his list of books acquired we can see that these Jews had connections with the rest of world Jewry. See his article in JQR, vol. 10 (1898).

As an alternative to the “center vs. periphery” model, the author suggests that we can perhaps look at Jewish history differently, with an “edah” model. In this model we can view Judaism as composed of different tribes, each with their own validity.

At the conclusion of the book, the author provides a few metaphors to help understand how Jews scattered across the world maintained themselves as a single people. One metaphor imagines the Jewish people as a rope. The rope contains diverse strands, all bound together, but each runs only for some portion of its length. Another metaphor imagines a tapestry. The tapestry is made up of interconnected threads of many colors, some of which “run through almost the whole” while some “are threads that hang loose, were snipped off, or morphed into a different form.” The author proposes a different metaphor, a conversation metaphor. Over all periods, Judaism is a continuing “conversation.” “As this conversation unfolds across great distances and historical eras, every given moment carries each preceding moment with it…[and becomes] intimately connected to each party’s sense of who they are in the world…”

The author is exceptionally talented. Every serious student of Jewish history should read this book. The author teaches at Case Western Reserve University and is the sister of Dr. Benjamin Cooper of Teaneck. The book was published by Indiana University Press in 2012.