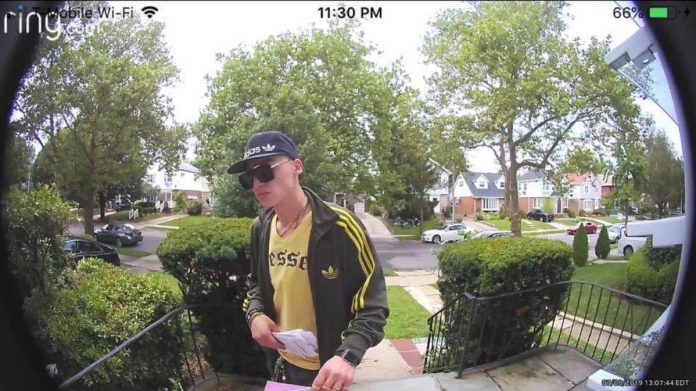 Two northeast Queens precincts worked together to arrest Fresh Meadows man, who was initially wanted for mail theft but was later charged with several other crimes.

According to the 111th Precinct, the neighboring 109th Precinct arrested 28-year-old Robert Aranbayev on Aug. 7. In addition to stealing mail and packages, the Queens District Attorney’s office charged the suspect with criminal possession of a forged instrument and weapon and drug possession.

On July 30, the 111th Precinct posted images of Aranbayev on Twitter, asking the public if they could identify him.

A week later, the precinct posted that cops had arrested Aranbayev near Cherry Avenue and Main Street in Flushing.

A criminal complaint from the DA’s office said that Police Officer Andrzej Maziarz saw Aranbayev in the driver’s seat of a parked silver Infiniti with “excessive window tints.” Upon approaching the car, Maziarz said he detected a strong marijuana smell emanating from the vehicle.

The report said that the cop recovered two aluminum foil packets and a glass pipe of heroin, a vial containing five oxycodone pills and 17 buprenorphine strips, three glass pipes — two containing methamphetamine and one attached to a bottle of the same drug — and a scale with cocaine residue.

Upon further inspection, he also found a straw with a quantity of cocaine and a black switchblade knife. A second police officer, Shane Jacobs, recovered a plastic bag of cocaine from Aranbayev’s pants pocket.

Police said that Aranbayev was in possession of a forged Department of Transportation handicap permit, which bore a different watermark and color than standard DOT permits. The suspect allegedly admitted, “someone made it for me.”

Maziarz recovered a Visa Vanilla debit card with no name and re-embossed numbers as well as three Hudson Valley checks and one Sterling Bank check from KM Construction Inc. Aranbayev was also in possession of several other credit cards and checks belonging to different people.

Detective Michael Russo reportedly ran the car through an NYPD credit reader and found that the numbers encoded on the card’s magnetic strip did not match the numbers on the front of the card.

Kevin Thurman, a representative of Lemle and Wolff Company and legal custodian for KM Construction Inc. confirmed that Aranbayev is not an employee for the company. Thurman added that the suspect did not have the permission or authority to take, remove, possess or exercise control over the checks in his possession.

The Bukharian Jewish Union Tackles the Opioid Epidemic in Queens