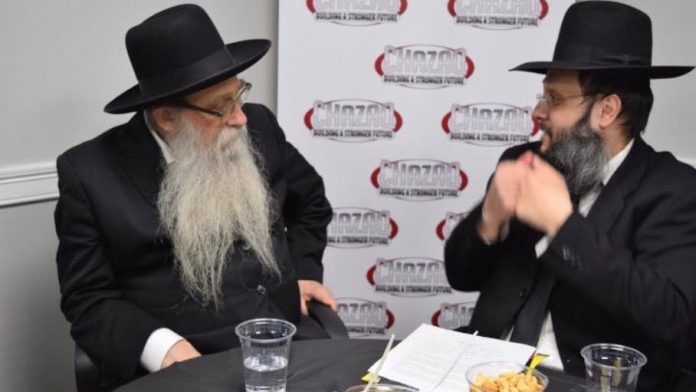 This past week, Parshas Vayikra, was the annual Shabbos of Chizuk in the Queens community in which HoRav Yerucham Olshin, Rosh Yeshiva of Bais Medrash Gavoha (BMG) in Lakewood, inspired hundreds of community members by giving shiurim throughout Kew Garden Hills.

On Motzai Shabbos the Rosh Yeshiva made a late night visit to the CHAZAQ Headquarters in Queens to get a close and personal glimpse into Chazaq’s life changing operations.

Then on Monday night, prior to a parlor meeting benefiting BMG at the Shafran residence, The Rosh Yeshiva Rav Malkiel Kotler also made a visit to Chazaq’s headquarters.

Similar to a recent meeting with Rav Shmuel Kamenetzky Shlit”a, the meetings focused on the challenges facing the Bukharian community with the foremost concern being that approximately 10,000 traditional Bukharian children attend public school in the Queens community.

Besides the violence and substance abuse that many students unfortunately become accustomed to, it has also led to widespread intermarriage and hundreds have lost their Jewish identity over the years.

Rabbi Ilan Meirov, Director of Chazaq, described some of the many programs that Chazaq offers to strengthen the community at large. They include Sunday and after schools programs for children, separate teen sessions for boys and girls, community wide shiurim on an array of topics, along with a Bais Medrash program and Kollel. The PSTY (Public school to Yeshiva division) is one of Chazaq’s Crown Jewels and the main topic of the meeting.

R’ Ephraim Rubinov, who was originally a successful computer technician who dropped his career to dedicate himself to the community, showed the Rabbonim all the work Chazaq has accomplished , and can be”h accomplish in the future with the proper resources. He is currently running a task force of several recruiters that contact parents, discuss the physical and spiritual dangers of public school, help identify the appropriate religious school, and help them transition into them. He has designed a computer program that stores the data base of thousands of children, the status of each active case, every interaction of his team and the prospective yeshiva student, and the follow up of all children that has already made the transition. R’ Ephraim himself is responsible for gathering all the documents needed to verify the lineage of each child. This can include birth certificates, marriage licenses, and kesubos. With Hashem’s help CHAZAQ has already transferred approximately 600 children to Yeshivos in two and a half years, a truly remarkable accomplishment.

The Rosh lei Yeshiva were visibly touched by the work CHAZAQ does and blessed them to continue in their Avodas Hakodesh.