See Below For Russian

(It is printed in abbreviation, from the book “History of the Kimyagarovs’ Family”, which is being prepared for publication)

Sources describing the history of Central Asian (Bukharian) Jews indicate that before the appearance of artificial acrylic paints, their main occupation was the dyeing of fabrics, yarns and threads. In this they have greatly succeeded. In those far years people managed only with natural colors. And of course the question arises: what colors were used, what was the painting technology, what methods and devices were used to carry out the process? The most primitive way to get dirty yellow and brown shades on the fabric was to soak it overnight in a container with boiled leaves or rhizomes of various plants. These colors were called the colors of the poor because of their accessibility. Rich and noble people preferred in dresses and interior bright colors. This is understandable, since in the east wealthy people are always reverent about clothes, ware, details of household things – carpets, oriental carpets, syuzena and so on. 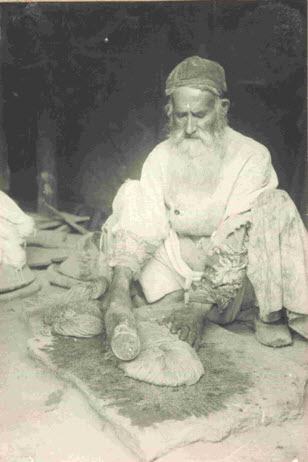 Appearance, good and elegant clothes, showed the financial position of the owner, as well as belonging to a certain estate. In the 17-18 centuries and earlier it was not easy, because at that time clothes mostly sewed from a limited range of natural fabrics. To give an attractive appearance, it was decorated with various kinds of embroidery from colored threads. Multicolored yarns and threads were also used in weaving. Silk and semi-silk fabrics – shai, atlas, bikasab, adriayas, benaryas, etc. – were produced from natural and dyed silk. This beauty was created by a special category of people who were engaged in dyeing and most of them were Jews who, from time immemorial, were the best masters, giving fabrics or yarn a stable color.

As travelers noted in the Bukhara Emirate noted, a Bukharian Jew can be “figured out” by hand, they were indigo. This was the main national characteristic. They were called kabudgari. From the Tajik word “kabud” is blue. Among the Muslims of the emirate, the expression “go to the Jew” meant intention to give something to the painting in blue. Of course, this was a figurative expression, because in practice the Jews of Central Asia used not only blue paint. In fact, it was a creative process, as the painting was carried out in different colors, respectively, used various dyes and other components.

One of the best representatives professionally engaged in dyeing and master of this craft was the founder of the Kimyagarov family , Abraham . He was born in 1786 in Baghdad (Iraq). There are several explanations why he got the surname “kimiyogar” – the alchemist. (this will be noted below). In the Russian interpretation, his descendants received the name Kimyagarov as early as 1888, when the Russian Senate passed a resolution regulating the names of citizens, including in the Turkestan region.  Abraham engaged in dyeing and had a good knowledge of the art of dyeing. In those years, to get such a high estimate, it was really necessary to be a virtuoso of his work. High-class specialists, mastering this craft with a limited number of initial colors, created a rich palette of tones. It is known that having at their disposal only a few dozen natural dyes, they could receive up to 800 colors and shades. Owning the secrets of dyeing fabrics, yarns and threads guaranteed sufficient income. Each family had its own secrets of this profession, which were passed on from generation to generation.

From unhindered times, for the coloring of fabrics, yarns or fibers, mankind used natural organic dyes contained in certain types of plants, insects or marine animals. Of the natural dyes of red color of animal origin, the best in beauty and firmness were purple from Mediterranean shellfish and carmine of insect – chervets and cochineal, and the source of the plant red paint-krappa was the roots of madder dyeing. The source of vegetable bright yellow color was turmeric and the roots of barberry. In addition, there were many dyes of different shades that could be obtained in each locality from the roots and bark of various plants (for example, walnut shell, pomegranate cake, etc.). All this range of dyes, their combination and technology for each process was well known by Abraham.

As noted by European travelers, the representatives of the indigenous nationalities of Central Asia treated the profession of the dyer with contempt and for the most part did not engage in it.

Well, those who were forced to resort to this fishery did not reach the required qualifications. The best dyers of threads, wool and fabrics in the Turkestan region were Central Asian (Bukharian) Jews. They also knew the secrets of cooking different colors. Based on the information of the representative of the embassy of Peter I in Bukhara, this is how M.F. Ibrokhimov notes this fact. (see the book “Textile Crafts of the Tajik People at the End of the XIX-th and Beginning of the XX-th Centuries”, Dushanbe, 2013) “….. By boiling the milled cochineal (kirmisi) local textile workers prepared red paint. An expressive description of this process can be found in Nikolai Miner, a representative of the embassy of Peter I in Bukhara: “And in Bukhara, besides all earthy vegetables and livestock, one expensive paint, called kermez, is born from one small tree in the steppe from worms, and in German kushenin … and there is a lot of this paint. But the Bukharians do not know the secret of how to do it, but they gain only those worms and sell a lot to the Jews, and the Jews of those worms rub and do paint, and then stir it with German. It paints silk, and in other states it paints cloth and protchaya. Which cloth is called karmazins. This steppe from the city of Bukhara is a two days’ distance to the Karakol side, and this city of Karokol too Bukhara. On this steppe of arable land and sowing there is nothing, for the fact that the sand is golden, and only that one paint will be born ”

In the process of dyeing, usually two substances are involved: paint and mordant – a means to fix the paint on the fabric or yarn. As a mordant used salts of various metals-aluminum, iron, copper, tin and chromium, which are well absorbed by the materials to be stained from aqueous solutions and combining with the dyes, form strong color compounds of various shades on the fibers. The process of applying salts to textile fibers is called etchback. To obtain a high-quality painting, the specialist should well understand the interrelation and interaction of this three: the dye, the coloring material and the mordant, take into account the resistance to light, washing and rubbing of various dyes and in each case correctly pick up the mordant. An important factor for the quality of painting had a temperature and time regime of the process. All these subtleties Abraham studied, worked and became the first-class master. Along with dyeing, he understood paints, was engaged in their manufacture and sale.

In addition, Abraham also perfectly mastered the more complex technique of dyeing,  “vat-dyeing” – indigo, which was owned by not all masters. This method experts refer to the greatest discoveries of antiquity. Its essence lies in the fact that with the help of blue indigo and various yellow dyes masters managed to obtain numerous shades of green, since in nature there are practically no persistent green dyes for fabrics, as well as purple and violet tones, staining the blue fabrics in red.

The main distinguishing feature of vat-dyeing is the transition of indigo into a soluble form called leucocompound (from the Greek word “leukos” – white, colorless) in an alkaline bath, in the presence of reducing agents. In this solution, the leucocompound, which is commonly referred to as the “cube”, is immersed in cloth or yarn, then it is air dried, where it turns from a yellowish-greenish color to blue, due to the oxidation of the leucocompound with air oxygen. In the oxidation process, the dye is converted on the fiber into the original insoluble dye, indigo blue.
This explains the strength of vat dyes, which do not molt when washing. Bottoms of other colors are also known. In the East, indigo was the most common and cheap paint. This is indicated, for example, by an episode of one of the tales of “A Thousand and One Nights”, where a woman roughly grieving for her husband smeared the walls of the house with mud and indigo.

Indigo is considered the “king” of dyes. In ancient Egypt about 1500 years B.N.C. Indigofер leaves were used, from which the natural indigo dye was isolated. If we consider that at that time the Jews were in Egyptian slavery, then it is possible that they were familiar with this dye and the technology of vat-dyeing even then.

It is the possession of Abraham in perfection by the method of “vat-dyeing” that allowed to obtain the surname “kimiyogar” – the alchemist. There are several family legends on this score. One of them looks like this.

Once Emir of Bukhara, at the invitation of the Emir of Afghanistan, arrived in Kabul to discuss trade and economic relations between their countries. Walking along the market, the governor of Bukhara drew attention to a large cauldron in which various things boiled. Several black-bearded men with stick like slingshot, without fear of boiling water and high temperature, pulled out twisted silk threads (bershun) and laid them on special drying supports. “These people are of Jewish origin,” the Afghan emir explained to his guest, “they are engaged in dyeing.” Of the colored threads, clothes, carpeting, suzanis and other products are manufactured for the individual and for the economy. ” Emir of Bukhara expressed the desire to invite a couple of families, specialists in dyeing, in Bukhara. The community granted the request of the emir, but at the same time stipulating that no two families would go, and ten, since at least ten Jewish men should participate in the prayer, and also include a shoyht, a butcher and representatives of other specialties.

Tradition says that upon arrival the Emir allocated for them, in the central market a separate shop and they began to show their skills. Once the emir, on the instigation of detractors, decided to check their work. The task was as follows. It was necessary to paint the tail of the white horse in different colors and “fix” them, which in those years was quite difficult to accomplish. But Abraham found a way out of the current situation, using the “dyeing” method.

He put up a pillar, around built more than a dozen foci. In each boiler, poured the appropriate paint. The Emir was informed that the master was ready for the task. On Friday, after the prayer, the emir, accompanied by his retinue, drove up on a white horse to the workshop and ordered to start painting. By this time, the colors in the boilers were already ready for use. The horse was firmly tied to the post and each individual part of the tail was lowered into different colors. Thus, the whole tail was painted. After finishing the dyeing, the emir, to test the quality, held a white handkerchief on the tail. The handkerchief was not soiled. He was pleased with the work and said to Abraham: “From today you are not just a dye, but” kimiyogar “is an alchemist, that is, the best dye.”

AMNUN KIMYAGAROV, Candidate of Technical Sciences, Associate Professor, President of the American Branch of the International Academy for the Development of Technology, Inventor of the USSR, member of the Writers’ Union of Israel, member of the “International Association of Creative Intelligentsia”

Among the Last Jews of Bukhara