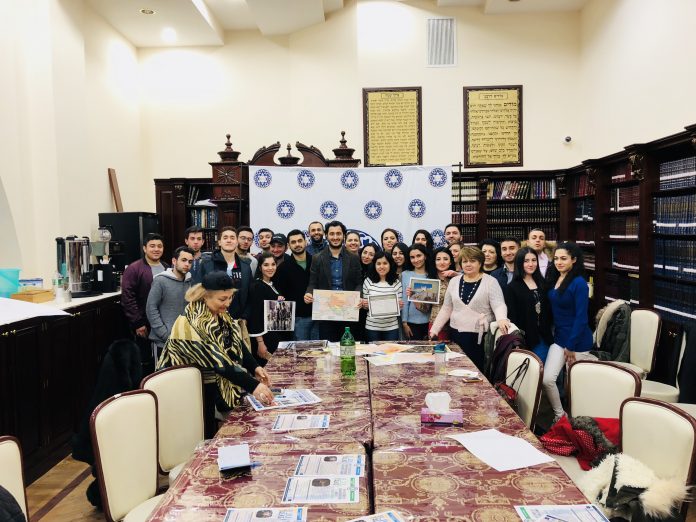 On April 17th, 2018, Bukharian Jewish Union (BJU), launched a new talk series on important issues and topics in the Jewish Community called “BJU Talks”. The first talk in the series was named “Why am I Bukharian if I am Not From Bukhara” presented by Manashe Khaimov, MSW., a fourth generation community organizer who is one of the founding board members of the Bukharian Jewish Union. He also serves as an adjunct professor of Jewish Studies at Queens College, with a special concentration in the history and culture of Bukharian Jews.

The event had 32 guests in attendance ranging from college students to young professionals who all shared a mutual interest in learning more about their heritage and exploring their Bukharian Jewish identity. The audience was welcomed by Betty Yusupov, President of BJU. She mentioned how happy she was to see so many young people at the Bukharian Jewish Community Center, and then introduced the keynote speaker, Manashe Khaimov. 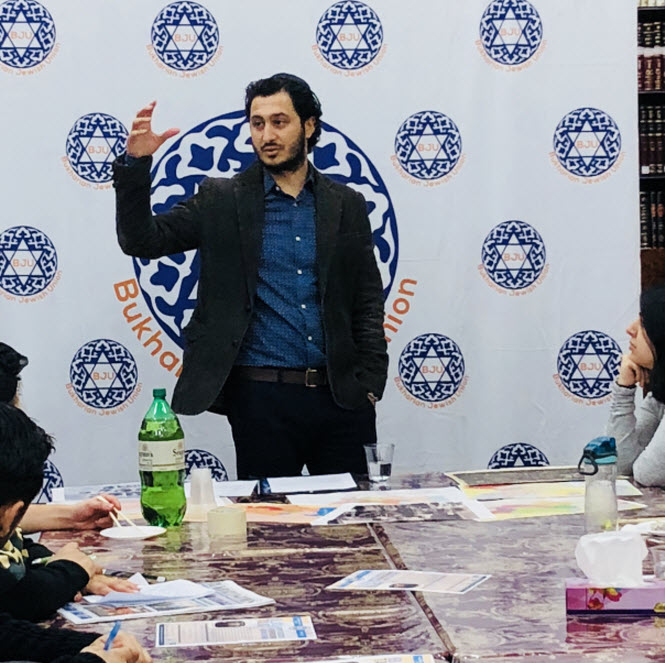 Manashe started off the discussion by asking the audience some questions. “What brings you here tonight? I would like you to answer one at a time. You could have spent your evening anywhere, but yet you decided to come here tonight, why?” he asked. The responses he received were insightful as to what motivated the young Bukharian population to learn more about their heritage and cultural roots.

“I am here because I am very curious to find out where I came from and why we are called Bukharian Jews. I tried looking it up online, but there is not much information out there other than Wikipedia, which is not a reliable source” said Rakhil Tillyaeva.

Another guest, Benjamin explained by saying “I heard many different opinions on who Bukharian Jews are and how we got to Central Asia and I would like to hear your point of view and your findings”. 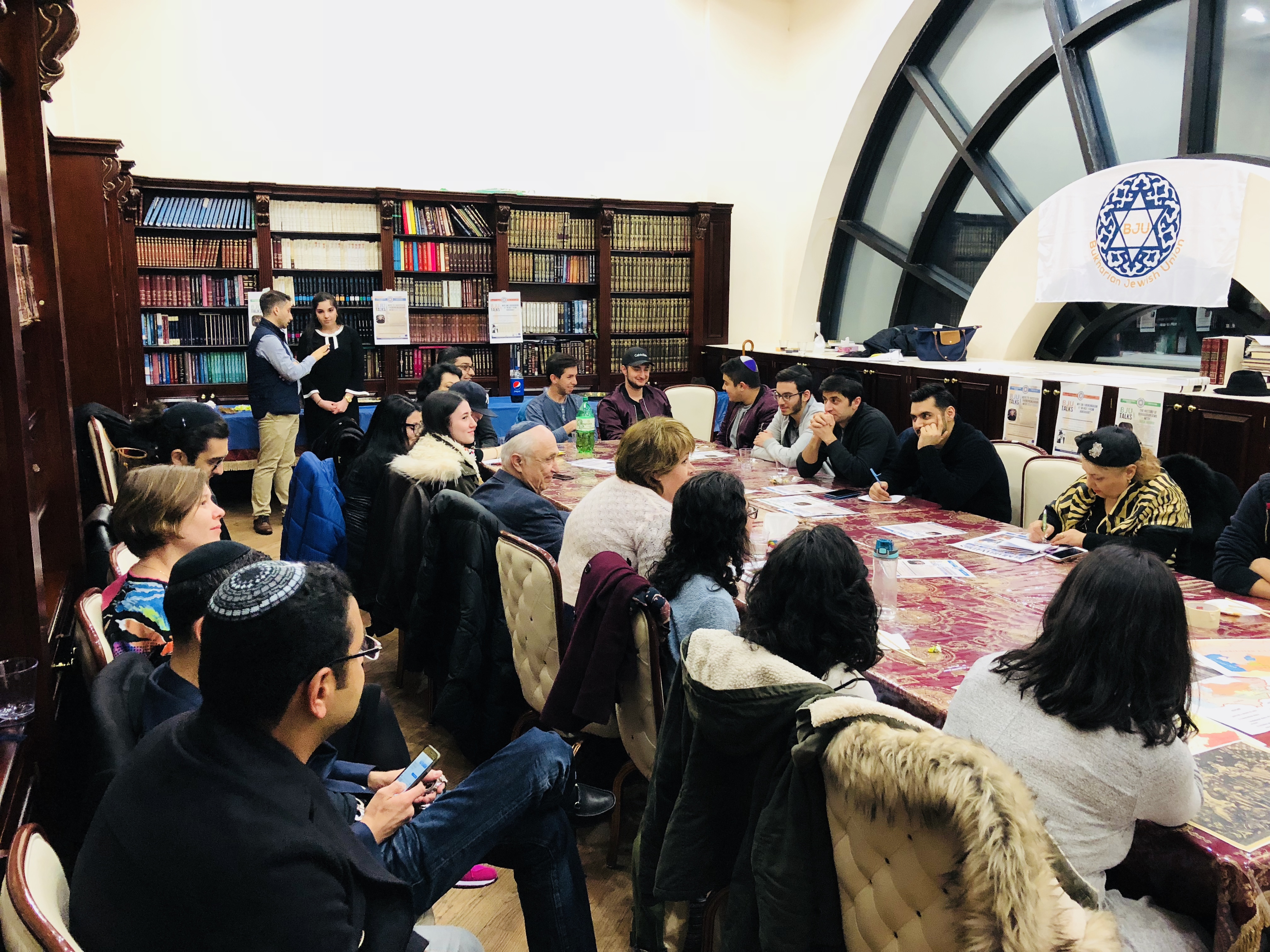 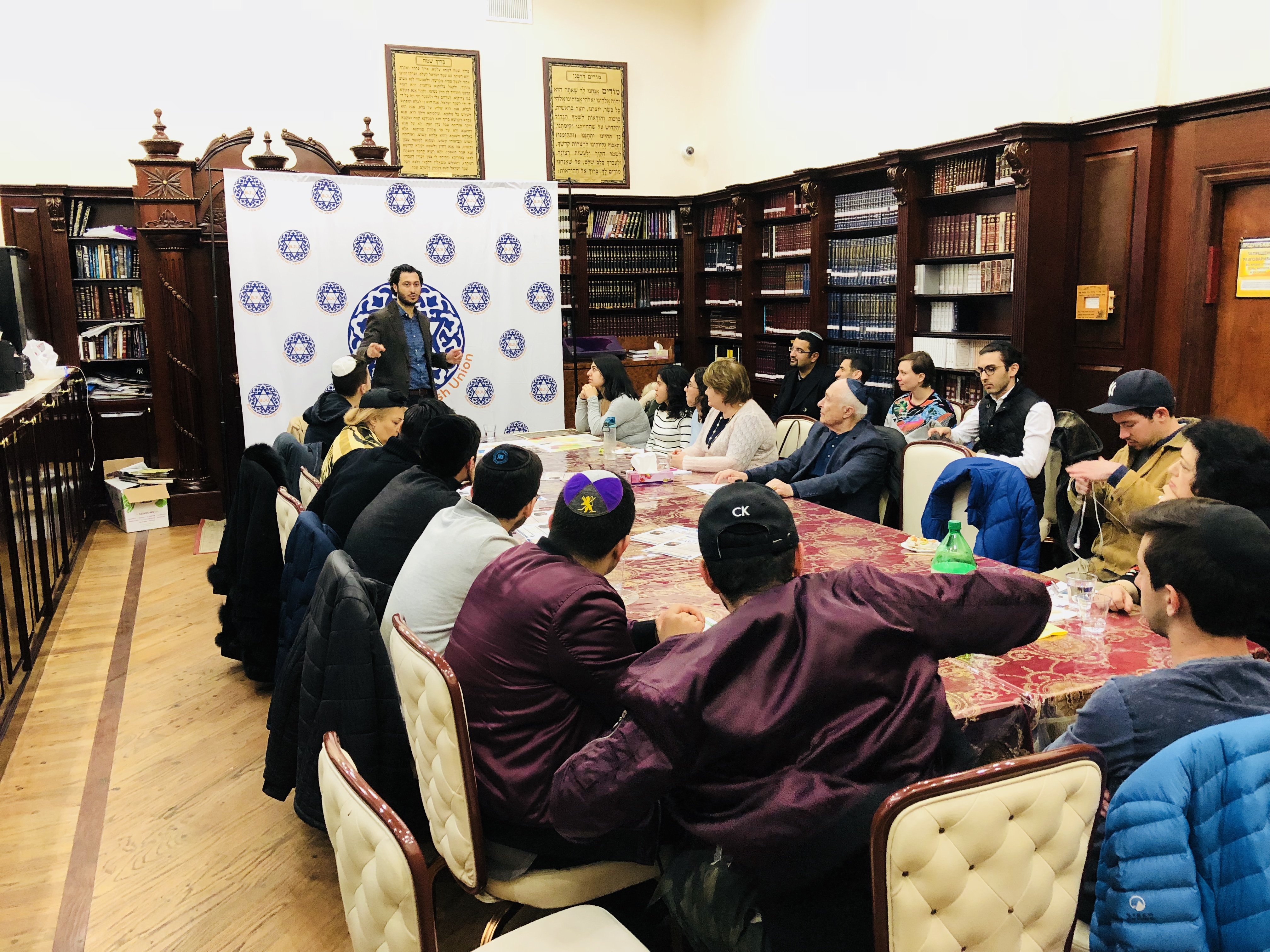 Manashe began his talk by explaining more about his journey of finding his identity as a Bukharian Jew, mentioning that he was born in Samarkand and emigrated to the U.S. with his family at the age of fourteen. He then mentioned that when he was participating in many organizations he would refer to himself as Russian, Israeli or Jewish just to fit in with his peers, but never used the term Bukharian to describe his cultural background. This inspired Manashe to start researching his Bukharian identity, creating documentaries, and writing articles on Bukharian culture and history. With his knowledge and expertise, he is now able to share this information with the rest of the community.

As first generation immigrants, young Bukharians have many questions on what life was like in Uzbekistan for their grandparents and where the traditions that they practice today came from. Throughout the talk, guests were very engaged in the discussion and curious about the topic asking questions such as “Is the Joma a Jewish or Muslim custom?” and “How did we get the last names that we have?” Manashe was able to offer insight into these questions using his deep knowledge of Bukharian history and offered examples that the audience was able to relate to.

His lecture was very interactive as guests were able to explore authentic photographs from Uzbekistan and use maps to identify their ancestor’s hometowns within the Central Asian region. Guests were engaged and eager to attend the next BJU Talk.

BJU Talks is a new concept that the Bukharian Jewish Union wanted to introduce to the community so that young professionals would have a forum to participate in discussions and interact with each other. The next scheduled BJU Talks event will be led by Ricky Cohen, the successful businessman and entrepreneur that helped grow the Conway Organization’s revenue from $4.5 million to $174 million. Mr. Cohen will share his secrets to personal and professional success and offer guidance on how to unlock one’s potential. The talk will be held on May 1st, 7:30 PM at the Bukharian Jewish Community Center in Forest Hills, Queens.
————
Bukharian Jewish Union (BJU), is a 501(c)(3) organization that aims to inspire unaffiliated Bukharian Jewish young professionals in their 20’s and 30’s by offering a networking platform for social, cultural and professional growth.
————
Manashe Khaimov is the Director of Community Engagement and Development at Queens College Hillel. He is a fourth generation community organizer who is a founding board member of the Bukharian Jewish Union, and the founder of both AskBobo.org, and The Jewish Silk Road Tours ™ walking tours in NYC. He is an adjunct professor teaching Bukharian Jewish History at Queens College. Manashe is a recipient of the NY Jewish Week “36 Under 36”, TimesLedger Newspapers “Queens Impact Award”.

Letter from Bukhara: finding the last vestiges of community in Central...