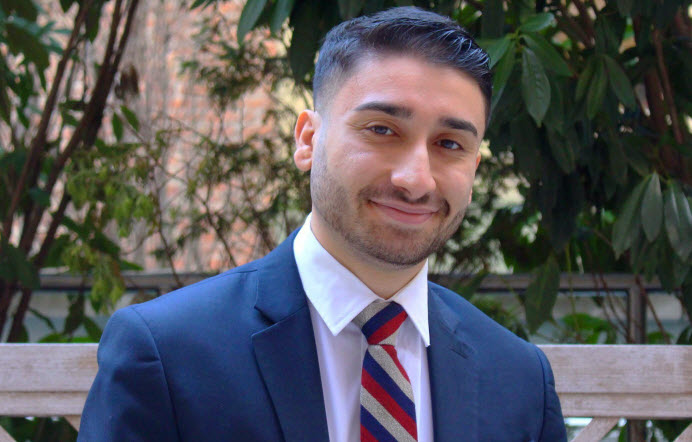 From a young age David Aronov, 22, has been the outspoken type, inclined towards activism and public service. Having been accepted to the New York University’s Robert F. Wagner Graduate School of Public Service, he was elected as the president of the graduate student association. Earlier this month, his blend of Jewish advocacy and political involvement earned him a spot on the UJA Graduate Fellowship Program. “Thirty students working in the nonprofit world are chosen each year. I am very excited to learn from other Jewish professionals,” said Aronov. “I don’t know if the UJA has ever had a Bukharian fellow.”

Since 2012, Aronov has been a staffer for Councilwoman Karen Koslowitz, handling constituent cases on a variety of topics concerning city agencies. At the same time, he completed his political science degree at Hunter College, served as secretary of Queens County Young Democrats, and was a founding member of Bukharian Jewish Union, which brings together young professionals in the community.

For his interview with UJA, Aronov explained the unique aspects of the Bukharian Jewish community. “We are a thriving immigrant community that is relatively new here. Look at what we’ve done. We have an entrepreneurial spirit, we are tight-knit and growing,” said Aronov. “I see a great sense of joy when people learn about Bukharian Jews.”

Growing up he often described himself to classmates as Russian which doesn’t require as much explaining as it would for a Bukharian Jew. To receive the UJA fellowship, Aronov was interviewed by a four-person panel. “I pushed for Bukharian communal recognition. I was asked what my community is like, how religious I am, and my favorite dishes.”

The scholarship’s panel was surprised that Aronov never took any Jewish Studies classes, for which he substituted his activism in the community, demonstrating knowledge of its history and customs. With a year remaining in his MPA program at New York University, Aronov looks forward to working either in government or in a Jewish nonprofit. His honor by the UJA demonstrates the dual nature of his work, at once entrepreneurial as a founder of BJU and at the same time involved in UJA, the largest Jewish nonprofit in the country. Mainstream and grassroots, and running well in connecting Bukharian Jews to each other and the larger Jewish population.

The Bukharian Jewish Union Tackles the Opioid Epidemic in Queens

In Queens, Bukharian Jews keep their tradition and their community strong