Swarms of New Yorkers, Jews and non- Jews alike, rallied together against anti-Semitism this Sunday, January 12th at MacDonald Park in Forest Hills. In light of the recent surge of anti-Semitic attacks, this is one of many rallies in support of Jewish people that have sprung up in New York City and across the globe. 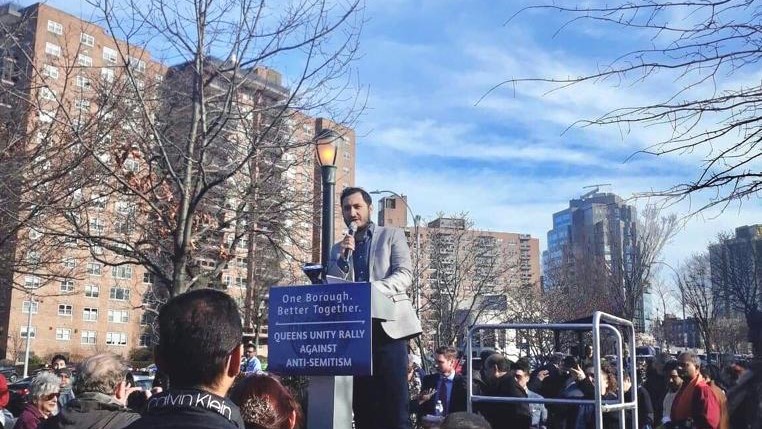 A variety of generations, cultures, and religions were among the crowd of 300-400, waving Israeli and American flags and holding up signs that read “Jews Fight Back!”, “No Hate, No Fear”, and “One Borough. Better Together”.

“We want to send the strongest possible message that anti- Semitism in all its forms is intolerable and not going to be accepted or even countenanced in any way in Queens and in our city,” said Ethan Felder, one of the rally’s lead organizers. “I’m hoping that there are new relationships formed between different denominations within the Jewish community in Queens and I’m hoping that there’s a strong display of solidarity from the non- Jewish community of Queens in support of many in our Jewish community.” 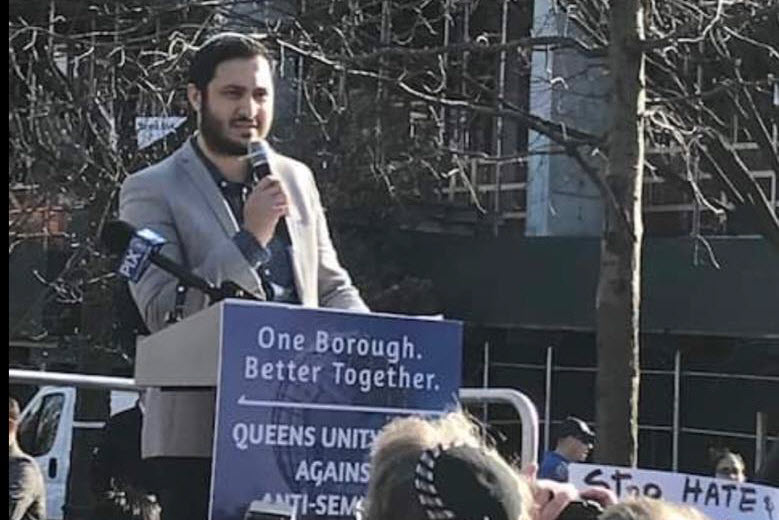 State interfaith leaders representing Jewish, Christian, and Muslim communities were invited to speak, including Bishop Paul Sanchez of the Our Lady Queen of Martyrs church, Imam Ibrahim Muhammad Shahidullah from the Interfaith Center of USA, and Rabbi Moses Birnbaum on the New York Board of Rabbis. Many offered their support for the Jewish community and promoted unity among the diverse residents of Queens.

Community leaders such as David Aronov and Cynthia Zalisky spoke about their personal experiences with Anti- Semitism and shared their ancestors’ stories of immigration in seeking refuge from the persecution of Jewish people. 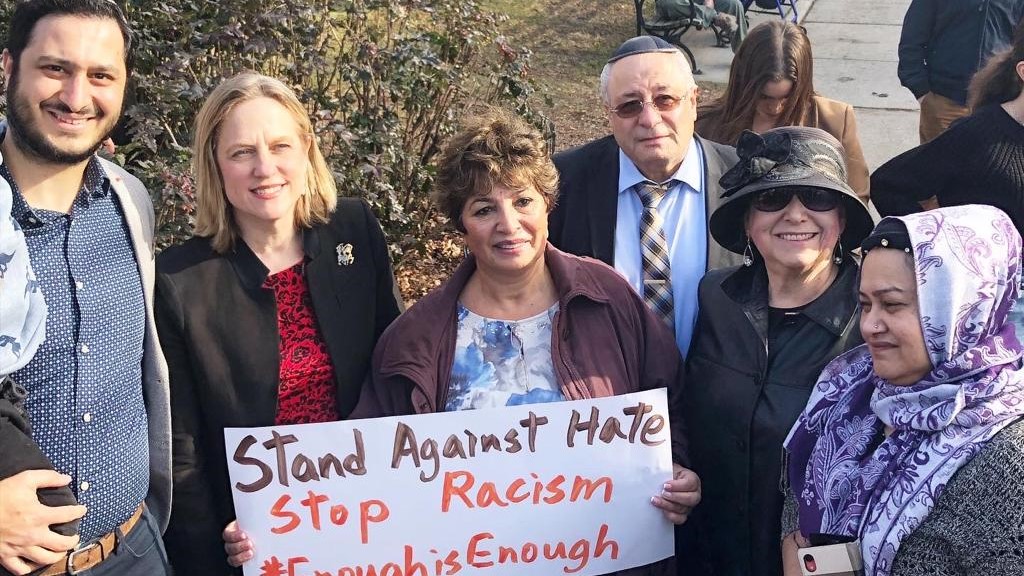 Mr. Aronov said, “I will never forget the shock and panic that raced through me upon learning that my own mother was a victim of this form of senseless Jew hatred. Seven months pregnant with my sister, back in her home country of Uzbekistan, a man punched my mom in the back and said ‘You don’t belong here. Take your things and go to Israel.’

“I saw a student walk out with an Israeli flag and light it on fire, throw it on the ground and watch it burn; I saw the NYPD arrest two students that were aggravating the Jewish community, while other students cheered on the assailants and the school did nothing,” said NYU student activist Adela Cojab. 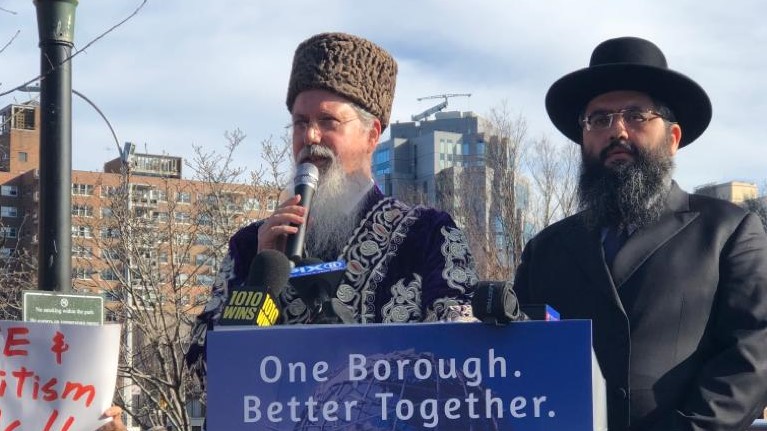 A large number of the more recent attacks are concentrated in New York, likely due to its significant Jewish population. More frequently, people living in Jewish neighborhoods are being targeted on the streets and in their homes, a pattern at its height during religious holidays. In December alone, four people were shot and killed at a Kosher supermarket in Jersey City, five were fatally stabbed at a celebration of the seventh night of Hanukkah in a Hasidic rabbi’s home in the upstate town of Monsey, and three were assaulted in the heavily Orthodox Jewish Brooklyn neighborhood of Crown Heights, to name a few. 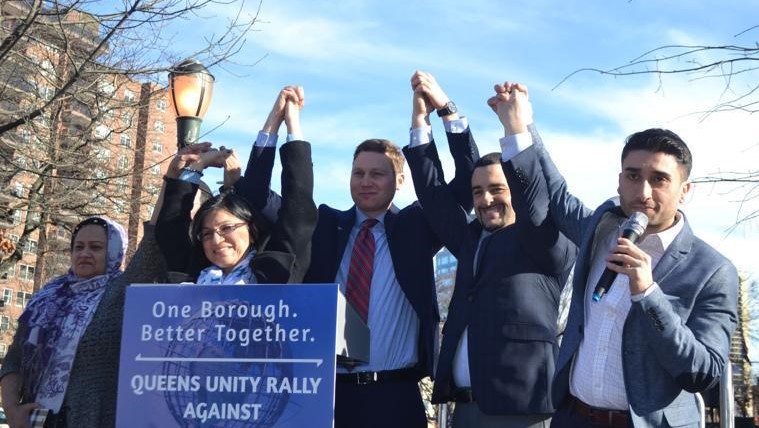 “It’s unfortunate that we have to display this type of pride after the horrific events in Jersey City and Monsey and in Brooklyn because the Jewish people have contributed a great deal to our city, our state and this country over the course of many centuries,” added Mr. Felder.

The recent publicized attacks are part of a larger resurgence of Anti-Semitism that has developed over the past few years. According to data from the Anti-Defamation League, this steady rise in Anti-Semetic incidents began in 2014 and spiked 57% in 2017. Today, Pew Research Center polls report that 64% of Americans believe that Jews face “at least some” discrimmination, and the percentage of those who said Jews face “a lot of discrimmination” has doubled since 2016. Mr. Felder explained that the rally was also intended to bring more attention to smaller, less-publicized Anti- Semitic incidents that are not “on the public consciousness.” 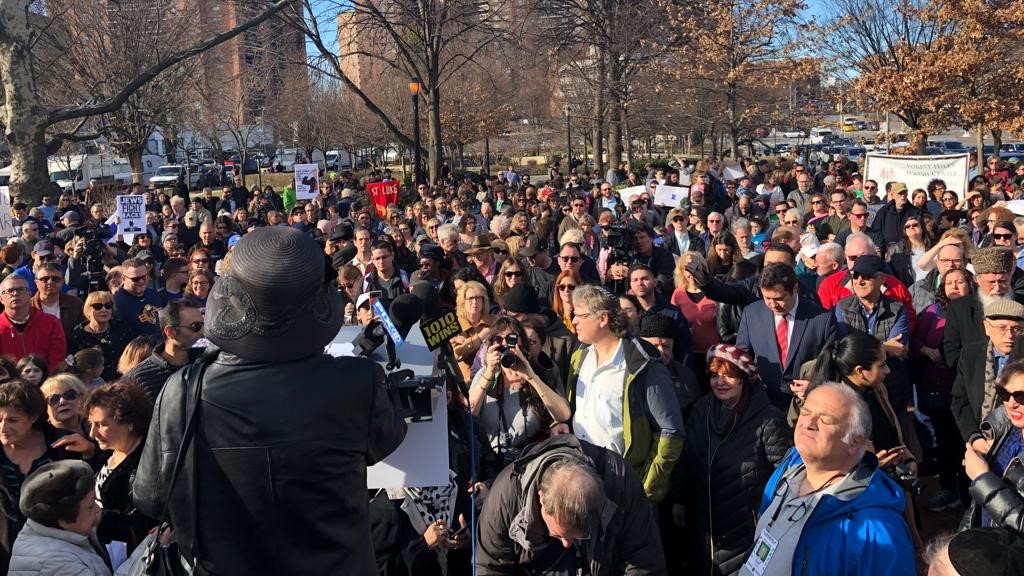 “I hope this rally finally pushes Jews to come together. Jews have to defend themselves against anti- Semites and form defensive groups,” said 15 year-old attendee Jessica Nektalov.

Bukharian Jewish Union director, social innovator and activist in the community Manashe Khaimov said, “Historically it never stops with Jewish community. Hate will hunt every single community if it is not stopped. This needs to stop. We must think of new ways to better understand each other.”

Co- organizer Jeff Kohn emphasized, “We will stand up for each other, and we will not let hate permeate throughout our city.”