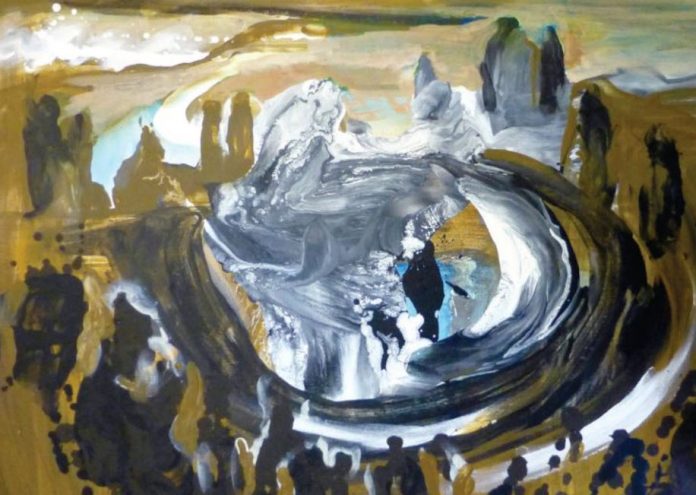 Rebels in the Desert Get Swallowed Alive

“Rabbi Moses, if you please, solve this dilemma for us!” Requested Korach the son of Yitzhar, who was Moses’ first cousin. In front of him were 250 men dressed in blue 4-cornered garments. “Must we put on Tzitzit with the blue thread on such a garment?” Korach asked, noting that they were already completely blue.

“It has 4 corners, doesn’t it?” replied Moses in the affirmative.

At this, all of the 250 men guffawed with laughter: “If a garment is of any other color, one blue thread fulfills the obligation,” said Korach’s men, “so why doesn’t the blue garment free itself?”

Then Korach continued: “Another question, Rabbi Moses. Does a room full of Torah scrolls require a Mezuzah on the doorpost?”

“Definitely,” replied Moses, and again the crowd guffawed: “If one little parchment can free a room of its obligation, certainly a room full of Torah scrolls should suffice!” (Midrash)

REBELLION IN THE DESERT

Our Parsha tells the story of the first “Mutiny on the Bounty.” Korach, a great but overly ambitious man, dared to challenge the leadership of Moses. It is important to note what the rebellion was not about. Even though Korach sought to take power from Moses, he never denied that Moses had taken them out of Egypt, had split the Red Sea, had brought down the tablets, and that he was a great prophet. These facts were common knowledge at the time and were impossible to deny. Korach’s only claim was that not everything Moses had said or done came directly from God.

Korach, of the family of Kehat, joined with his neighbors from the tribe of Reuven, (prompting the Talmud to exclaim: “Woe is to the wicked, woe is to his neighbor!”) who were upset over the fact that their tribe had lost the privilege of being deemed the “first born.” In addition, the 250 men referred to above were disgruntled “first born sons” who had lost their status after the Golden Calf.

Although they say politics makes for strange bedfellows, this was a very shaky coalition, each with his own ax to grind. The Talmud says that Korach had an ulterior motive as well. He was jealous of Elitzafan, the son of Uziel, who was appointed as the prince of the family of Kehat.

Korach reasoned as follows: The oldest brother Amram had two sons, Aaron and Moses in positions of high leadership. Korach’s father Yitzhar, was next in line after Amram, so Korach (as the first born of Yitzhar) should have received the next available position, that of prince. But instead, he was skipped over and Elitzafan (the son of the youngest brother, Uziel) was chosen.

Korach’s agenda was to abolish Moses’ appointments so he could stand a chance of becoming the prince! So he went about rousing the rabble, claiming that Moses was acting on his own and assuming all of the power for himself.

Korach developed a philosophy, which is still common today. Korach claimed, “The entire congregation is holy, so why are you elevating yourselves above the nation of God?” (Numbers 16:3) (Indeed, all the Jews have a “holy calling,” as we saw last week – “You shall be holy” (Numbers 15:40) – but the nation had not yet reached the level of holiness expected of them by God. The book of Numbers is one long story of the gap between where the people were, and what they’re supposed to be.) (Rav Hirsch)

Let us follow Korach’s line of reasoning. The examples of the blue garments and a room full of Torah scrolls were intended to demonstrate a principle. We all have obligations we would rather not meet. Many people have the attitude: “Let me just fulfill my minimal obligation as easy and quickly as I can. If the rabbi is pious, so much the better. He can be designated to fulfill our obligations for us. So let us ensure that the rabbi is holy so we can enjoy his merit.”

(This logic was incorrect, because no matter how great is a group of people, they still need a leader.)

After trying to appease Korach and his men to no avail, Moses challenged them to a “spiritual duel.” He presented an opportunity for them to fulfill their desire and become High Priests. They would bring incense to the Tabernacle, and Aaron would bring as well. Whoever’s incense God accepted, would be proven correct.

The incense was the most sublime offering in the Temple service, burnt to a crisp with almost no residue, symbolizing total devotion to God. On Yom Kippur, the High Priest would enter the Holy of Holies with the incense in hand to offer it to God. However, the risks were great. In fact, the sons of Aaron died offering unauthorized incense. Were Korach and his men ready to risk their lives to become “High Priests”?

Moses claimed that all his decisions – from appointing Aaron as High Priest, to the choice of Elitzafan as prince – were made by God. Korach claimed Moses was biased and was responsible for these decisions. The controversy would be decided the next day, and only one would survive. This was a duel to the death!

The rabbis ask how could Korach, a great and wise man, be so mistaken? The answer is that he was fooled by his own greatness. Through prophecy, Korach was able to see illustrious descendents following him. The famous Levites, who would later sing in the Temple and compose Psalms beginning with the words “A song to the sons of Korach,” were his progeny. The famous prophet Samuel, who is equated with Moses and Aaron (in Psalms 99), was also Korach’s descendent. Korach figured: “With all this greatness in store for me, I must be the one who will survive!”

However, Korach made one fatal mistake: He failed to consider the possibility that his sons, who were also involved in the controversy, would later repent and thereby survive and achieve greatness. In Korach’s mind the concept of repentance didn’t exist.

Korach timed his insurrection with the displeasure of the people over the decree to spend 40 years and die in the desert. The appointment of Elitzafan had occurred much before the rebellion, yet Korach waited for the proper time to begin his demagoguery, when he thought the people would follow him. Korach and his followers instigated: “You promised them a land of milk and honey, but now you say they will die in the wilderness” (see Numbers 16:14).

A political power play usually begins with an ulterior motive. This motivation often inspires a hidden agenda, and a rational ideology, generally based on some kernel of truth. The constitutions of brutal regimes such as Russia and China are replete with flowery language of the promise of equality and rights to all citizens. (Of course if you happen to be a party member, you are a bit more equal!)

In last week’s Parsha, the spies also had ulterior motives. They feared they would lose their positions when the Jews entered the land. This fear led them to create a rational ideology (“we are not on the spiritual level to enter the land”) into which were added a few grains of truth (“the land is flowing with milk and honey”).

So too, Korach had an ulterior motive (jealousy) that led to his ideology (no need for Moses), with an added grain of truth (his illustrious descendants). (heard from Rabbi Shlomo Wolbe)

DEFIANCE ON THEIR FACES

Moses continued to pursue his peace plan, and summoned the troublemakers Datan and Aviram. They refused the summons with defiance on their faces. They said: “Even if he decrees to blind us (by removing the veil covering his shining face), we will not ascend to him” (Numbers 16:14).

The Midrash says that at this point, they sealed their own verdicts. “They will not ascend again, only descend!”

Moses proclaimed: “If these men die a natural death (Your Highness, I choose to die of old age!) that will prove these were my own decisions. However, if I only followed the instructions of the Almighty, may the Earth swallow them up alive” (Numbers 16:29).

This was a “measure for measure” punishment because they had accused Moses – “the most humble of all men” – of being haughty. Since Moses was at ground level, their punishment must be below that! At that point, the Earth opened its mouth (which had been created at the dawn of creation – Avot 5:8) and sucked down Korach and his men from the midst of the people. At the same time, a fire devoured the 250 men that had accepted Moses’ challenge to offer the incense. The rabbis say that Korach was both consumed by flames and swallowed up.

His sons reconsidered their actions and repented on the way down, and a staircase led them out. During this time they composed a psalm.

God told Moses to command Elazer the son of Aaron to gather and empty the incense from the fire pans, and to beat them into a covering for the altar in order for all generations to remember this event.

We must appreciate the greatness of the Jewish people. These rebels sincerely wished to serve as priests in the Temple. If their intention had not been sincere, their fire pans would not have been deemed holy. Although they were misguided and paid for their mistakes with their lives, their basic motivation was to come close to the Almighty. But we must also remember that God instructs us how to properly come near to Him. (Rav Shlomo Wolbe)

STOP THE ANGEL OF DEATH

The people still complained that Moses caused bloodshed. They said he could have simply dismissed the affront to his honor, and not caused so much death. They said: “You killed the people of God!” (Num.17:6)

This attitude missed the entire point of the controversy. They should have realized that Moses is 100% for God. Communal responsibility came into effect and God decreed to wipe out the entire nation. This time Moses had no words to say in their defense.

Then, as the angel of death began his gruesome chore, Moses remembered the information the angel had taught him at Sinai about the power of incense, and immediately dispatched Aaron with incense to stop the plague. This taught the people that it wasn’t the incense that was so deadly, but the power of sin.

Aaron stopped the angel midway by demanding the cessation of this slaughter. The angel proclaimed that he was under Divine orders. Aaron countered that everything Moses says is the will of the Almighty – and let’s go ask them! This stopped the plague and saved the day.

Finally, the uniqueness of Aaron was proven in a peaceful manner. Moses commanded every tribal head to write his name on his staff and submit it to him. The tribe of Levi was represented by the staff of Aaron. Moses placed all the staffs in the Holy of Holies, with the staff of Aaron in the center. The next morning, Aaron’s staff sprouted almond blossoms for all to see. Every tribal head then took back his staff, and it was established for all times that God had chosen Aaron and his descendents as the priests of Israel.

Answer: Almond trees are the first in the season to give forth fruit. This means that the Kohanim are energetic like almonds, swiftly performing their obligations in the Temple. Also, whoever challenges the children of Aaron will be swiftly punished like the fast growing almonds!

The staff of Aaron was placed in the Ark together with the tablets, a jar of manna, and Moses’ Torah scroll, to remind the people that the family of Kohanim was chosen forever.