By the Decree of the Council of Ministers of the Tajik SSR No. 19 of January 30, 1981 “On the perpetuation of memory” the name of B. A. Kimyagarov is given to the House of Cinema of the Union of Cinematographers of Tajikistan.

The centenary (September 30, 2020) of the outstanding cultural figure of the USSR and Tajikistan, the founder of Tajik cinema, Bension Arievich Kimyagarov, coincided with the pandemic. In this regard, the public was unable to carry out the necessary events and pay tribute to the memory corresponding to his status and the enormous contribution he made to the treasury of world, Soviet and Tajik cinema.

By this date, the second issue of the colorfully designed magazine “Kino”, published by “Tajikfilm”, was published, dedicated to the 100th anniversary of the great son of the Central Asian (Bukhara) Jews Bension (Boris) Arievich Kimyagarov.

Bension Arievich was born in the city of Samarkand in 1920 in the family of Ari and Leo Kimyagarov. His grandfather Mullo Chaim was the grandson of Abraham, the founder of the Kimyagarov family, was a rabbi, and also a master of dyeing. He inherited this from his ancestor Abraham, who not only knew the dyeing business, but was a man of a creative plan. He created and used a significant palette of colors, the secret and technology of which he passed on to his descendants.

Bension’s father, Ari (1887-1962), strictly adhered to religious canons. He was distinguished by modesty and decency. In 1907, Ari ben Rivka married a religious, educated girl Davydova Leo (1891-1931) from Samarkand. She was engaged in needlework, embroidery and knitting.

Three children were born and raised in the family: two daughters – Esther (1910-1984), Tamara (1924-2007) and son Bension (1920-1979), the future leading figure of Soviet and Tajik cinema, who glorified his family, ethnos throughout the world, Tajikistan and the former Soviet Union.

In the 30s of the 20th century, the family, in search of a better and more promising life, moved to the city of Stalinabad (Dushanbe), the capital of the new state formation – the Tajik ASSR, as part of the Uzbek SSR. In 1934, Bension Arievich entered the Kokand Pedagogical College at the faculty of Tajik language and literature. In 1936, after graduation, he returned to Stalinabad (Dushanbe), where he began his career as a teacher in one of the city schools.

In those years, there was an acute shortage of qualified teachers, people dedicated to their work, one of whom was Bension Arievich. This is confirmed by an excerpt from his autobiographical book: “The road goes to the mountains”, where he writes “… I am proud that many of my students later became famous artists, scientists, teachers and doctors.”

While studying at the college, Bension Arievich took part in the work of the Youth Theater (theater for young spectators), acting as an artist and assistant director.

1936-1939 – student at the Stalinabad Pedagogical Institute.

But he was drawn to the artistic environment, to the cinema. In 1939, Bension Arievich entered the faculty of directing (workshop of S. Eisenstein) of the All-Union State Institute of Cinematography (VGIK), which he graduated in 1944.During the war, from 1941 to 1943, the institute was temporarily located in Alma-Ata, where Bension Arievich combined his studies with the work of the secretary of the city committee of the Komsomol (Lenin Communist Youth Union).

Since 1944, director of the Stalinabad film studio (since 1957 – “Tajikfilm”), director of feature films, screenwriter and director of documentaries. Author of 33 works in 28 projects, including 13 feature films and 14 documentaries, including masterpieces of film art, paintings on the theme of ancient history: for example, based on “Shahnameh” by Firdavsi – “Banner of the Blacksmith” (1961), “The Legend of Rustam ”(1971),“ Rustam and Sukhrob ”(1971), by the way, both films were awarded the State Prize. A. Rudaki and “The Legend of Siyavush” (1976) and others. With these films, Bension Arievich stirred up the memory of the Tajik people about its spiritual origins. He is the founder of the historical, epic genre in Tajik cinema.

This contribution to the activities of Boris Kimyagarov is invaluable and dear to history, say film critics in the book “Encyclopedia of Tajik Cinema:“ Kimyagarov is one of those who aroused national consciousness in Tajiks. Having recreated in the historical memory of the people the image of the great Rudaki, the spiritual power of the poetry and wisdom of Firdausi, and thereby, in general, reviving the true moral foundations of the Tajiks – the heirs of the richest spiritual culture, some as his associates, others as opponents, he pushed, oddly enough, to mass, even nationwide rethinking and development of the spiritual sources of the past. ”

One of the admirers of oriental culture and creativity of Bension Arievich, Muscovite Vyacheslav Davydov, also writes about this with delight: “What a pity that the Genius comes to this world for a short time, but the meeting of the two geniuses of Rudaki and 1000 years later with Kimyagarov gave a wonderful result – the film“ The Poet’s Fate ”(1959).

Until 1956, documentaries were predominant at Tajikfilm. Bension Arievich set himself a goal to reverse this situation and move on to creating feature films, and he succeeded.

Thanks to the efforts and talent of Bension Arievich, the stage of creating post-war Tajik feature films began. A pioneer in this direction was his film “Dohunda” (1956), based on the first work of the same name of the Tajik Soviet literature by S. Aini. This film, to date, has been recognized as one of the best films of “Tajikfilm” and interest in it does not fall.

Looking ahead, I want to note that in July 2019, a retrospective of the film “Dohunda” was organized in the Tretyakov Gallery in Moscow, and a year earlier the film “The Death of a Poet”.

It is known that modern computer programs enable production directors to use an unlimited degree of freedom, build and use virtual worlds that are not inferior to reality. But at the time of Bension Arievich’s work, computer graphics were just beginning to take their first steps. And his films, based mainly on historical materials, demanded scale and he tried to bring the decorative design of his works closer to the real image.

For this purpose, for filming, he traveled to cities where there were monuments of oriental architecture, mausoleums and ancient burials.

Mass shootings drew crowds of people. Part of them was engaged in extras. Others came to see and get in touch with the legend of Tajik cinema, Bension Kimyagarov.

Brothers David and Solomon Fatahovs, who lived in Leninabad (Khojent) in 1967, told the author that Bension Arievich came to this city for the shooting, which took place near the fortress “Alexander the Great”. In continuation of their story, they emphasized that when communicating, being a famous person, Bension Arievich always remained modest, simple and communicative. They often visited with him on the set.

In the Leninabad region there was a collective farm-millionaire “Moscow”, which was headed by the Hero of Socialist Labor S. Urunkhodzhaev. This collective farm employed 22 Heroes of Social Labor, and the chief accountant was the father of the aforementioned brothers – Moshe Fatahov. During a break in filming, Bension Arievich came to his office, they had lunch and had very interesting conversations. Bension Arievich and his wife also stayed at their house on Friday nights. It was from him that the inhabitants of the house learned that in one of the museums in Cairo there is a manuscript of Avicenna, on parchment in Hebrew letters. (Ibn Sina was born in 980 in the small village of Afshana (Central Asia) near Bukhara, the capital of the Samanid state. Who is Avicenna by nationality, scientists have not yet come to a common opinion: Uzbek, Tajik, Iranian, Turk?

Considering that in the Middle Ages, literate and talented people of Jewish origin were often forced to convert to Islam, perhaps some of Avicenna’s ancestors, and perhaps he himself, switched from Judaism to Islam? We know quite a few such examples from the history of Central Asia – the Chala Jews who converted to Islam. Historians point to the enormous influence Avicenna had on classical Iranian, Uzbek, Arab and Jewish medieval literature). 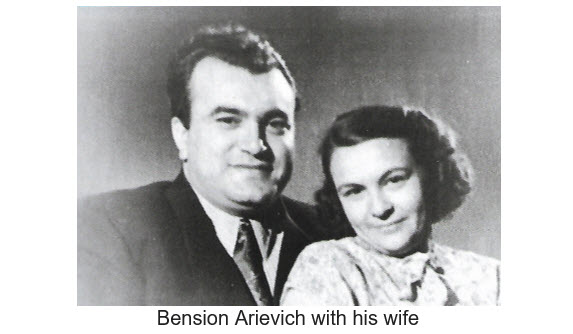 Bension Arievich’s modesty is noted by everyone who has ever encountered him. Photographer of “Tajikfilm” Zaur Dakhte recalls that during the celebration of the 50th anniversary of Bension Kimyagarov, in 1970, he listened to eulogies addressed to him with his head bowed low.

History has proved more than once that when a person, thanks to his abilities, talent and hard work, reaches any creative heights, there are always ill-wishers and envious people who are ready to tarnish his good name. So it happened with Bension Arievich. There were people who slandered him and accused him of inappropriate spending. And only thanks to the intervention of the republic’s top officials from the upper echelons of power and admirers of his talent, Bension Arievich was able to be released from arrest. But the stress hit negatively affected his health. In 1979, after a hernia surgery, he died without regaining consciousness.

In 1944, Bension Kimyagarov joined his destiny with Anna Mikhailovna Koganova (1922-1973), who played an important role in his development. She was a student at the Kharkov Medical Institute, and during the war she was evacuated to Tajikistan.

In 1945, a daughter, Elizabeth, was born into the family. She was the only child in the family. After the third year, Anna Mikhailovna, at the request of her husband, stayed at home to take care of her family and raising her daughter. She also had to act as a secretary. By the way, the daughter followed in her father’s footsteps and also became a film director.

HOW ALBANY BENT OVER BACKWARDS TO HELP ONE OF NYC’S “WORST...