See below for Russian

Prof. Efim Fatakhov devoted his book to one of the burning issues of our history, the number of Jews in the cities of Central Asia in different historical periods and the time of their appearance there.

Responding to their requests, the active and promising youth leader of the USA community, Manashe Khaimov, held several meetings as a leitmotif, which was this topic [March 6, 2018 at the opening of the “Meros” (heritage) program in Queens College; the April 17 debate, organized by Bukharian Jewish Union-President Betty Yusupov]. The author of these lines gave a lecture “on the name of the ethnic group(ethnonym) of Bukhara Jews in the light of the realities of the 21st century”, which was read on April 22 at the meeting of the club “Roshnoi” was also devoted to the explanation of some historical moments of the appearance and use of the above term.

As if in unison to discuss this topical issue, Professor Efim Fatakhov published his research.  A review of the author’s previously published works shows that he is not new in the field of research and statistical data processing. He has books and articles devoted to the employment of our compatriots and their contribution to various sectors of the economy of the former USSR.

In the new book, Efim Fatakhov was able to concentrate in a concentrated form a significant material in figures on the history of Central Asian (Bukharian) Jews, supported by text explanations. The book consists of 4 chapters and 14 tables, as applications, which reflect a large amount of statistical information.

Since ancient times, the population statistics have always been given special attention, as it reflects the social life of citizens in all its diversity. First of all, it gave the opportunity to learn their strength and determine taxes. Its emergence and development has provided knowledge of quantitative data on population, livestock, land, estate, free citizens, slaves, etc., Ilf and Petrov in “Twelve chairs” gave quite a significant characteristic of this word: “the Statistics knows all” because it collects all sorts of information about everything.

The first publication on statistics is the Torah, which tells about the census of military service conducted under the leadership of Moshe and Aaron.  Using statistics from the heads of States and associations had the opportunity to more accurately determine the quantitative composition of the residents, distribution of the population for military units, tax collection, determining votes in elected institutions, etc.

Initially, the statistics were based on direct observation and collection of the necessary information. Gradually, with the development of society improved methods of processing of primary information and thus reduced the proportion of errors.

In modern society, statistical data are constantly used in all spheres of life and are managed by persons holding the position of Chief Data Officer(data Director), responsible for data policy.

The book by prof. E. Fatakhov is devoted to the analysis of the quantitative component of Central Asian (Bukhara) Jews from ancient times, when the meaning of such a word as statistics was poorly understood to the present day. In the first Chapter, the author focuses on the history of the appearance of Jews in Central Asia. His materials are based on his own research, taking into account the data of many authors involved in this issue: famous historians M. Zand; D. Ochildiev; P. Iskhakov; M. Abramov and others.  In their opinion, Jews owe their appearance in the cities of Central Asia to the functioning of the great silk Road (GSP), starting from the 2-1 century b.n.c. – 1-2 n.c., which connected China with the countries of the Eastern Mediterranean. A significant part of the roads (more than 8 thousand km) passed through the territory of Central Asia. And as the author rightly emphasizes, the first evidence of the life of the Jews in this territory is related to the above period. This is understandable, since many archival sources are still closed to wide access to them by researchers. This primarily applies to the countries of the East. Some scientists believe that Jewish settlements in Central Asia appeared even earlier.

Fatakhov took 1832 as a starting point for the number of Jews in the cities of Central Asia, when the English missionary of Jewish origin Joseph Wolf determined the number of Jews in Turkestan numbering 13,600 people in all cities. It is known that in addition to the main roads of the GSP had a lot of branches. The GSP passed through the cities of Central Asia, including Bukhara, Samarkand, Balkh, Mary, Tashkent and many others. And as E. Fatakhov correctly emphasizes, by 1867, Jews lived in almost every city of Turkestan.

In the 5-6 centuries there was a mass flight of Jews to Central Asia from the Sasanian Empire, who joined the communities of the Jews of Babylon and Persia already existing in this territory. As can be seen from the data presented, the settlement of Central Asian cities by Jews was not a one – time act, but a process that was periodically intensified, depending on the attitude of the authorities of Asian and Arab States-Iraq, Iran, Afghanistan and others to Jews. Some researchers believe that in the cities of Central Asia Jews settled necessarily through Bukhara. In fact, it is not necessary that the Jews drove through Bukhara and there are many facts to confirm this.

In the early 19th century, there was an increase in religious fanaticism and extremism in the Islamic world, and especially in Shiite Iran. Fear of possible persecution led to mass migration of Jews from these territories. Jews massively immigrated to the Bukhara Emirate and the Kokand Khanate, where they were treated more tolerant. The Jews of Mashhad, who escaped from the Shiite pogroms, the Jews of Herat, as well as the Jews of Afghanistan, found refuge here.

According to the facts cited by E. Fatahov, it can be considered that Samarkand in the history of Central Asian (Bukharian)Jews played a significant role, at least because Jews settled here in the early Islamic period. It was the largest center of Jewish life in Central Asia and it was in Samarkand that the historical moment was recorded-for the first time, in 1843, the sale of land to the Gentiles

Specific figures on the number of Central Asian (Bukhara) Jews in cities and in the world presented in Chapter 2 show that they were collected by the authors without taking into account the laws of statistics, which were still poorly studied at that time. Accordingly, the number of different sources varies sometimes two or more times in both directions.

The third Chapter is devoted entirely to the method of calculating the number of our ethnic group. In it the author returns a little back from 1832 and points to the number of Jews who moved to Kazakhstan in the 18th century. It also shows an analysis of the rate of growth (reduction) of Central Asian (Bukhara) Jews based on the materials of the works of scientists who studied this issue in different historical periods, and identifies the causes of these phenomena.

In addition, from the above materials it can be seen that during the pogrom in Iran in 1839-40, part of the Jews from Mashhad fled to Turkmenistan (Merv oasis), the same thing happened in 1880-1890. Here the author emphasizes that at that time there was also an outflow of Jews from the cities of Central Asia. Thus, in 1845, the Northern Afghanistan was separated from the Bukhara Emirate. Since then, the resettlement of Jews from Central Asian cities has been repeated from time to time for various reasons. In the last third of the 19th century in Eretz Yisrael and the creation of the quarter ” Rehovot»; in the 20th century due to the repression of the Bolsheviks; in connection with the outbreak of world war II and other historical events.

The last Chapter presents a summary of E. Fatakhov’s material, where he gives adjusted demographic data on cities and state formations in Central Asia in different periods and countries of the world, taking the starting year 1832, and the last 2016.

On the basis of the materials presented by prof. E. Fatakhov, the following conclusions can be drawn: 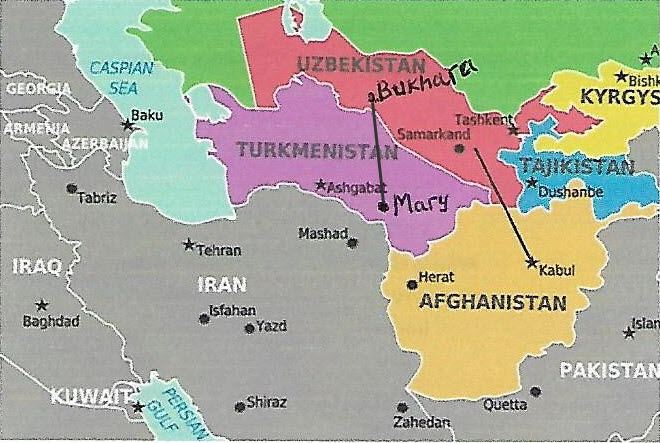 In conclusion, the book is written in a simple and very understandable language, easy to read and accessible to people of any age interested in the history of Jews and Central Asia. Unfortunately today, the main readers of books in Russian language are mostly middle-aged and older people. I would like to wish the author health, creative success and to find the opportunity to publish a book in languages – Hebrew and English, available to the younger generation, which every day more and more interested in their history.

AMNUN KIMYAGAROV, candidate of technical Sciences, associate Professor, President of the American branch of the International Academy for the development of technology, Inventor of the USSR, member of the Union of writers of Israel, member of the “International Association of creative intelligentsia»